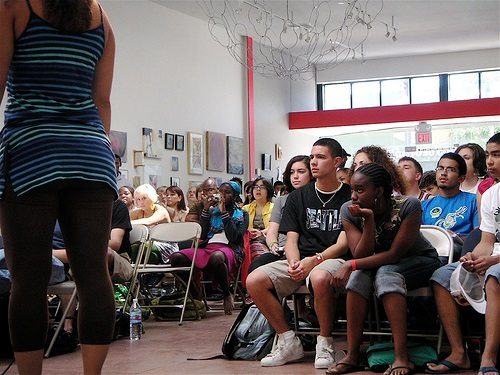 “In every state in America, the greatest lessons are the ones you don’t remember learning.”

The viral video going around, “Somewhere in America,” has brought the power of spoken word into focus—as well as a diligent and creative nonprofit that motivates youth to express themselves through literary performance.

Get Lit is a L.A.-based nonprofit that strives to increase teen literacy by encouraging students to express themselves through creating classical and spoken word poems as well as studying canonical pieces as part of the learning process. The Queen Latifah Show brought on Get Lit participants Belissa Escobedo, Rhiannon McGavin, and Zariya Allen to perform, “Somewhere in America,” after they were a smash hit speaking for a crowd of more than 17,000 at the Hollywood Bowl, opening for John Legend. The poignant spoken word performance has gone viral and highlights the hypocrisy of what students are taught in the U.S. public education system, touching on important subjects from the censorship of history books to rape culture.

Watch the slam poetry performance below from the 2014 Brave New Voices finals, and you will see how beautifully and powerfully these three young women convey their message:

Get Lit participant Rhiannon says, “I think poetry is the best way to express emotions. I believe that if you write your feelings down, memorize the words and perform them aloud, that you won’t be bothered by that problem. It’s an amazing way to help people—especially teens.”

Get Lit is a fairly young organization. It started in 2006, but has already expanded from its L.A. base and launched a pilot program in Washington, D.C. through After-School All-Stars. The organization’s Classic Slam in Los Angeles was the first poetry slam event to draw upon both canonical works and spoken word responses. The nonprofit hopes to eventually develop a national curriculum so youth across the nation can learn to elevate their voices through spoken word.—Aine Creedon