Giving USA 2013: Giving Coming Back Slowly and Different After Recession 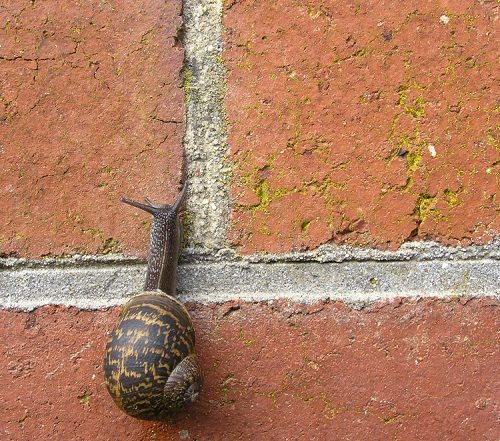 Editors’ Note: These articles are commentaries on the findings in the 58th consecutive edition of Giving USA: The Annual Report on Philanthropy, the semi-annual report on charitable giving published by the Giving USA FoundationT, researched and written by the Indiana University Lilly Family School of Philanthropy. As the press release notes, “Giving USA’s annual estimates are based on econometric models using tax data, government estimates for economic indicators and information from other research institutions.” Nonprofit Quarterly has published commentaries and reactions to the Giving USA findings for some years now as well as joining Indiana University’s Patrick Rooney, associate dean of academic affairs and research at the Indiana University Lilly Family School of Philanthropy, in a discussion of the issues and questions raised by the report, scheduled for June 26th at the Bradley Center for Philanthropy and Civic Renewal at the Hudson Institute in Washington DC.

The overarching news that this year’s Giving USA report shows us is that we are still climbing only very slowly out of the recession. (If you remember, the title of last year’s NPQ report on Giving USA was, “Giving USA 2012 Indicates Long Slow Uphill Slog…If We Are Lucky.”)

Looking at the graph below, we appear to be setting a record for slowest recovery. 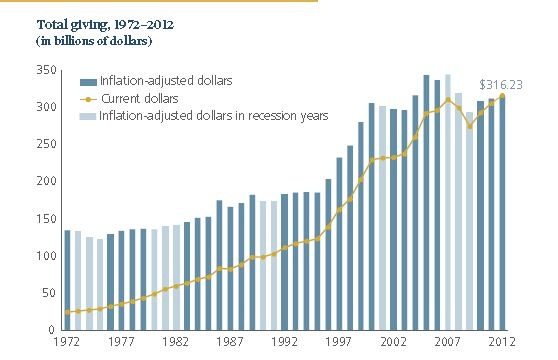 With the depth of this recession, giving declined precipitously—by about 15 percent in 2008 and 2009 combined, adjusted for inflation. In terms of time taken for recovery, it only took three years after both the 1973-1975 recession and the 2001 recession for giving to meet or surpass the total giving level seen prior to the recession. But as of 2012, giving is still well below pre-recession levels, four years later.

But there also may be  some significant changes as it comes back; this year, NPQ is most interested in two categories of the report: giving to public benefit organizations and giving from corporations. We are also very interested in what has happened with regard to giving to health, but we suspect that that may be related to the corporate question. The change from a slight reduction in corporate giving last year to a big increase of nearly 10 percent this year is too unusual to not look into deeply. (See Rick Cohen’s box below.)

Public benefit organizations, a category that includes intermediaries like donor-advised funds and United Ways, saw giving increase by 5.4%. The fact that $54 million included in this category went to Hurricane Sandy relief, combined with phenomenal growth in the money going into donor-advised funds, suggests that the amount of money going to the rest of those in this category has either stagnated or, more likely, been reduced significantly.

Contributions to the big three national DAF sponsors—Schwab, Fidelity, and Vanguard—were up 44 percent in 2012 as compared to the previous year, according to Schwab Charitable’s president and CEO, Kim Laughton. While the Big Three do not tell the whole story of donor-advised funds, it suggests that other funding intermediaries in this category, like the United Ways, the Combined Federal Campaign and the Jewish Federations of North America, are more than likely not growing. We know that the Combined Federal Campaign did see a drop of $14.3 million from 2011 to 2012, or 5.2% of their campaign. Perhaps more notably, there was a drop off by donors of more than 10 percent.

Why should we care about this tradeoff? Quite simply, while the money raised in those combined campaigns is almost immediately turned around into grants, the same cannot be said about donor-advised funds. Compared against most foundations whose payout floor against assets is 5%, the 17% estimated payout of donor-advised funds looks great, but it does not look nearly as healthy when compared with the far larger annual payout of Federated workplace campaigns. The development of the personal giving mechanism of the donor-advised fund is clearly the way of the future, but it will mean that there may be fewer immediate payoffs in this category than the numbers might suggest.

Patrick Rooney has promised that the effects of the growth of donor advised funds is one of the details on which they will drill down further in one of the Spotlight publications that they will do for Giving USA, and he says they would like to break this topic out further as a regular part of Giving USA. We will be working on the same thing here at NPQ.

Don’t get us wrong; it appears that some categories of recipients have seen legitimate gains over the last year, recovering from the cratering caused by the recession. Giving to the arts, for instance, looks like it may be recovering, although for some organizations, deficits caused by unfortunately timed investments made in programming or facilities have caused problems that now need to be remedied. The growth of giving in this area from last year to this is even more striking when you consider that last year, the giving in that category was inflated by one $800 million gift to one museum.

The largest category of giving—to religion—is trending downward, and according to Patrick Rooney, that’s a long-term trend. Most of the giving in this category is from individuals. He says that each generation is giving less than the last, and that giving to religious organizations is now a third of total giving, where a few decades ago, it was more than half. Still, it constitutes two-thirds of household giving.

In human services, if we take out the money spent on Sandy, it is very likely that there has been no growth, and even a small negative trend.

Giving to health is up, which is somewhat confounding because historically, when the government makes a major and well-lauded investment in an area, private giving lessens. This has not been the case with Obamacare and private giving. NPQ suspects that the increase in corporate giving is from Pharmaceutical companies and is likely gifts in kind. According to a survey done in 2011, 19% of what was given by corporations were gifts in kind.

No Growth without Limits, and Concentrating on Donor Vehicles Rather than the Numbers

The recovery in giving is slower than usual following this past recession, and inherent in that slow growth is a lot of change in the way giving is done and the way money flows within the sector. NPQ has tried to cover some of those we can speculate about in an informed way but we believe there are a lot of differences that we are unable to identify right now. We encourage readers to look at the package provided by Giving USA yourselves and make some speculations of your own. Those hypotheses are a first step towards making meaning of all this data, and maybe we can get IUPUI to investigate your questions more fully through the coming year.—Ruth McCambridge