Giving USA 2019: Most Nonprofits Will Need to Work Harder for Their Money

This article is based primarily on Giving USA 2019: The Annual Report on Philanthropy for the Year 2018 and an interview with Dr Patrick Rooney, executive associate dean for academic programs at the Lilly Family School of Philanthropy. Please register today while space remains available for our special webinar with Dr. Rooney on June 26, 2019, where he will review this year’s findings in more depth and answer additional questions from participants.

This morning, Giving USA released its report on charitable giving in the United States for 2018, and few are likely to find any reason for enthusiasm in the numbers. The good news is that last year saw the second-highest amount in nominal dollars ever donated by individuals. The not-so-good news is that 2018 was second behind 2017, which means that giving in nominal dollars declined this past year for the first year since the Great Recession.

This should come as no surprise, as Dr. Patrick Rooney is quick to point out. Rooney says that 2017, when the tax overhaul bill passed, and 2018 should be seen as being closely related. Some people bundled more than their usual amount into charity gifts before the end of 2017 to avoid any real or feared negative tax consequences. In turn, that may have suppressed the dollars donated in 2018.

There were other factors at play too, he tells us. One is the fact that though the stock market thrived through most of the year, it saw some tumult towards year’s end; timing like this can have deleterious effects on end-of-year giving. “It becomes something of a game day decision,” he said.

In the end, the intricate play of factors led Dr. Rooney to the profound summation, “It’s complicated.” (Well, he said “complex.”) And to illustrate the point, he walked through some of the dynamics he thought were interrelated:

But as we look at the recipient fields, we see many more fields that saw their donations decline or remain steady rather than increase.

The three fields that stayed relatively flat with smaller decreases:

The two fields where giving increased

These last two fields have a long record of growth, tracing back to the inception of Giving USA’s measurement of the giving environment, so continued growth in these areas could be expected.

The Backdrop of a Disturbing Mega-Trend

Now, lets put this in the context of a trend that isn’t part of Giving USA’s reporting but which Dr. Rooney wrote about last year: while the number of households giving is decreasing, the proportion of money given through mega-gifts against overall giving is increasing. In other words, fewer households of moderate means are giving at all while more of the money being given comes from those who are extremely well off. This is bad news for small community-based nonprofits.

This trend was reiterated recently in a study by the Fundraising Effectiveness Project that analyzed the fundraising results of more than 4,500 nonprofits. It found that there had been a 1.6 percent increase in giving by individuals in 2018 over 2017, but the increase was entirely driven by donations over $1000—smaller gifts and rates of donor retention both fell. In fact, the study found that the number of people who gave in 2018 fell by 4.5 percent while the acquisition of new donors fell by 7.3 percent. For smaller nonprofits without connections to wealth, this trend should be considered a warning, especially within the context of slow or flat growth in individual giving overall.

“What’s concerning about this data are the significant decreases in the New and Newly Retained Donor Groups,” said Ben Miller, chief analytic officer at DonorTrends, which created the final FEP report. “From past reports, we’ve seen that charities seemed to do well at acquiring new donors but retaining them was a challenge. Now we’re seeing difficulties in acquiring donors, and that could spell real trouble with fewer donors giving. Again, it’s great to see giving increasing overall, but the question remains around the long-term sustainability of the sector if these trends continue.”

While giving as a percentage of disposable income and as a percentage of GDP stayed relatively steady at 1.9% and 2.1% respectively, corporations, though their dollar amounts grew, kept their giving to a pathetic 0.9% of pre-tax profits. Those profits themselves have been rising apace over the years, especially since 2009–2010, in the midst of the recession, when those profits rose $400 billion in one year. The percentage given over those two periods—very different as far as corporate profits were concerned—was 0.9% each year, in case you still thought a rising tide raised all boats.

We reproduce the chart below because, in some ways, it is such a summation of the times. Keep in mind as you look at it that a good portion of this corporate giving is in in-kind goods. 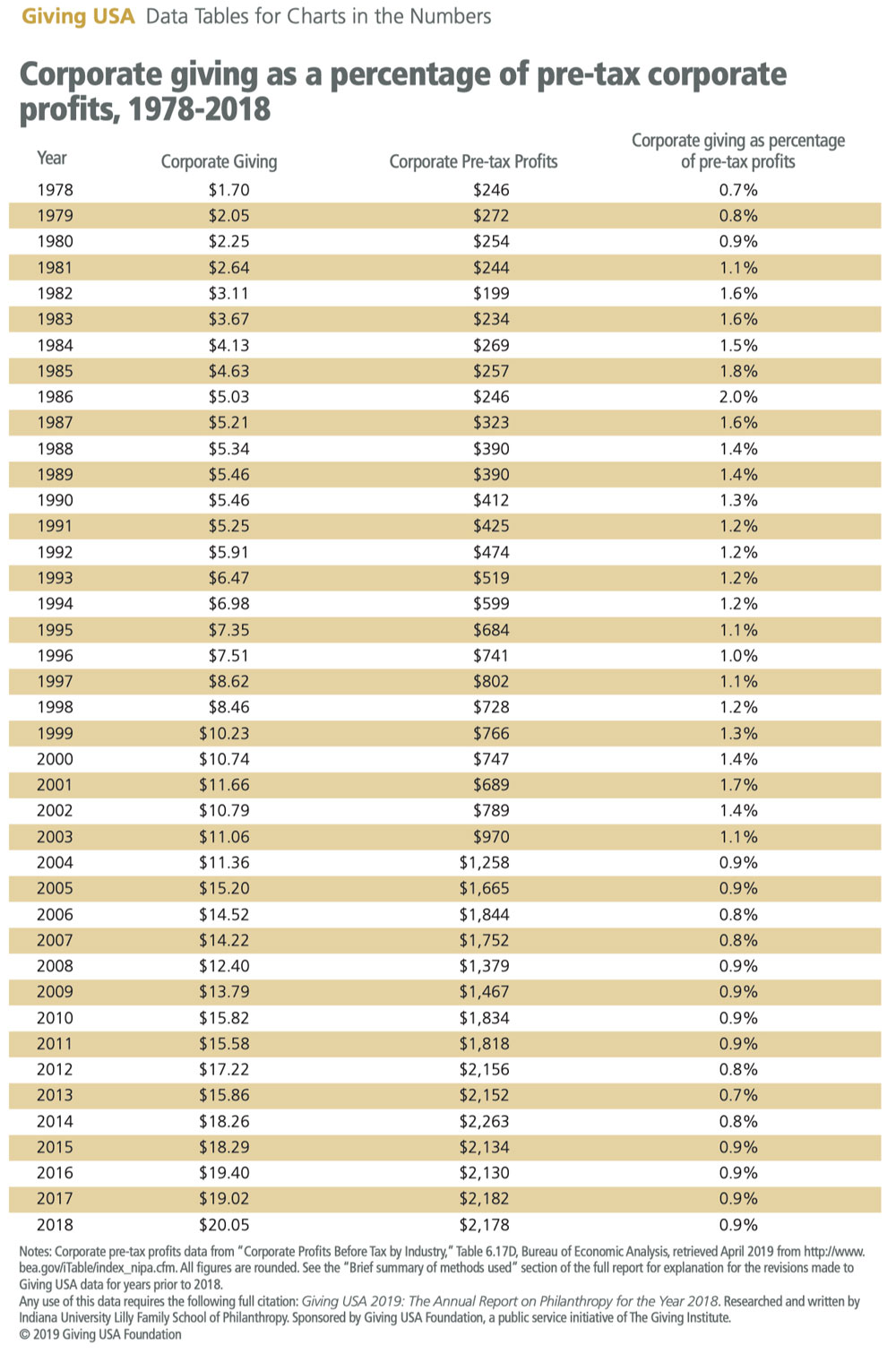 What to Do? Recommendations for Philanthropy and Nonprofits

Elizabeth Boris recently said, “Giving is increasing because of larger gifts from richer donors. Smaller and mid-level donors are slowly but surely disappearing—across the board, among all organizations. Philanthropy should not and cannot be the domain of the wealthy, and the entire sector needs to look at how we reach out an engage these donors.”

In our opinion, there is nowhere near the degree of alarm there should be about the loss of ordinary people as donors. The potential effect on our collective and individual senses of agency as political actors is more than concerning. Philanthropy should be paying more attention to the problem by helping nonprofits launch robust donor engagement programs. These require capital and access to expertise.

And finally, with this help, nonprofits should consider how to work countercyclically to build and engage their donor bases differently and with a sense that their future sustainability and independence depends upon it—because they do.

More about: PhilanthropyResearch on patterns of giving