Goldman Sachs’ Rolls Out a Counter-Narrative in Philanthropic Giving 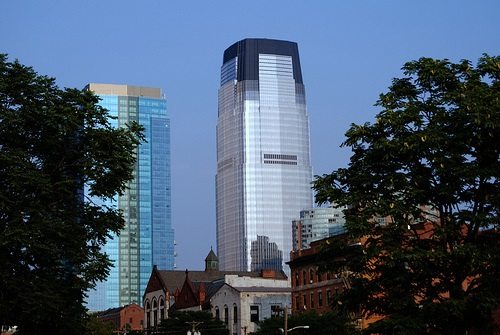 After Goldman Sachs set aside $23 billion in a bonus pool for its executives at the height of the recession, the firm set about creating a “counter-narrative.” Only a year before, Goldman had repaid a $10 billion TARP loan from the federal government, though taxpayers lost $1.4 billion in the transaction according to Forbes. But that allowed Goldman Sachs to continue making money and raking in profits from investment banking, characterized by Goldman CEO Lloyd Blankfein as “doing God’s work.”

A piece of the Goldman counter-narrative involved major charitable donations. This week’s New York Times has a long “Dealbook” review of Goldman’s plan for “buying redemption.” Dealbook writer Suzanne Craig’s opening paragraph lays out the success of its counter-narrative:

“Goldman Sachs is a master at making money. Lately it has become a master at giving it away. Goldman—for many a symbol of Wall Street greed and excess—wants the world to know it has a charitable side. With the same calculation that earned it a reputation as the savviest trading house on Wall Street, it has staked out a position as one of the nation’s leading corporate philanthropists, giving away more than $1.6 billion since 2008.”

Craig reports that the Goldman Sachs Foundation pays its CEO, Dina Powell, a former advisor to President George H.W. Bush, $2 million, which puts her in the ranks of America’s best-paid charity executives, and “has been given more resources at a time when the bank itself has been cutting back sharply on expenses—and people—on big trading desks,” creating what she says is “bitterness among some employees.” In addition, Craig adds that Warren Buffett likes Goldman’s charitable programs—“the best that I have seen,” Buffett says—but doesn’t like the notion of corporate philanthropy, because it takes money out of corporate profits and shareholders’ returns.

Goldman’s high profile philanthropic efforts—Craig calls them “two splashy programs”—focus on women in developing countries (the 10,000 Women program) and on investment in small businesses (the 10,000 Small Businesses program). Overall, she says, Goldman ranked fourth among corporate givers in the U.S. Goldman’s 10,000 Women program was active at the most recent Clinton Global Initiative program, sponsoring a panel moderated by Chelsea Clinton and paying the CGI $375,000. In 2008, Democratic advisor Gene Sperling earned $887,727 in consulting fees for his work with the 10,000 Women program.

The Small Business program isn’t just Goldman charity. It has another dimension: connecting the behemoth Wall Street firm to the problems of Main Street. Nonprofits with small business constituencies, such as the National Urban League, also connect with and promote this program (The National Urban League received a few six-figure grants in 2011 from the Goldman Sachs Foundation for its role in recruiting participants for 10,000 Small Businesses; also, in the 2011 Form 990PF for the foundation, there is a grant of $913,627 to Bridgespan for measurement and evaluation services related to both 10,000 Women and 10,000 Small Businesses).

Goldman’s $1.6 billion in “redemptive” charity seems to have been a corporate commitment, both from the foundation’s grantmaking and through the corporation’s direct giving, and probably might be considered, as the Goldman website does, a long-term charitable investment rather than a direct and immediate expenditure. The New York Times article, however, highlights the foundation in this picture. For the Goldman Sachs Foundation itself, the numbers from the foundation’s Form 990PF are somewhat lower than the aggregate philanthropic grantmaking cited in the NYT article:

For the sake of comparison, consider that Blankfein’s 2012 compensation totaled $21,000,000 on its own, not all that many millions less than the foundation’s total grantmaking.

The major Goldman investments into the foundation since the 10,000 Women and 10,000 Small Businesses programs really kicked into high gear after the Goldman announcement in 2009.

Corporate giving may be highly valued among many nonprofits, but it isn’t totally clear that its value outweighs other corporate policies and practices, even if philanthropic initiatives like Goldman’s are well received in some quarters and well capitalized.—Rick Cohen