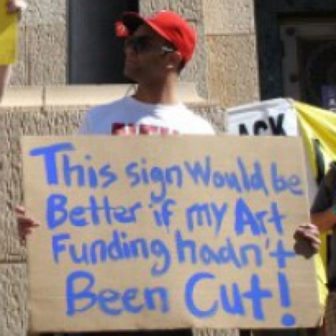 To mark the 25th anniversary of the “first-ever benchmark study of institutional philanthropic support for arts and culture” in 1993, Grantmakers in the Arts (GIA) commissioned arts philanthropy researcher Steven Lawrence to analyze data and trends in arts funding in the US over the last few decades. Those who work in the field will not be surprised by key findings, which paint a picture of a long roller-coaster ride of variable government funding, dramatic rises and falls in corporate support, and many twists and turns in the foundation landscape. The sector has remained remarkably resilient through most of this period—but since the Great Recession (2007–13), not so much.

Lawrence reports his findings along a timeline dating back to the 1980s. He acknowledges that trends don’t neatly line up with the construct of decades, but he describes the overall state of arts philanthropy using themes from each decade to frame larger trends and fluctuations in the overall economy as well as in the arts. The report emphasizes the evolution of arts funding, not of the arts sector per se, and is therefore attentive to the various categories of funders and the narrative threads that can be traced within and across these categories over time.

Those who work in the arts sector or in philanthropy will want to read the full report, which appears in the Winter 2018 issue of GIA Reader. GIA is also presenting a webinar on the research on March 27th. What we offer here is a summary of some of the key observations from Lawrence’s in-depth analysis.

The 1980s are described as representing the beginnings of an organized approach to understanding, studying, and supporting the field of arts funding—the establishment of GIA, for example, as well as a significant increase in the number of state, regional, and local arts agencies. Those agencies were essential to the overall funding infrastructure, as the National Endowment for the Arts (NEA) required four percent of its funds to be directed to the state agencies. This growing infrastructure of support agencies also represented the beginnings of local advocacy, capacity-building services, and research on behalf of artists and arts organizations. Also, many NEA grants required matching funds from private sources, making it essential for arts leaders to foster networks of philanthropic support at local levels.

The 1990s were characterized by an increasingly sophisticated funding community that was learning how to make the case for “why arts and culture matter.” This was in part a reaction to the “culture wars” over censorship in the 1980s, which for some time after led to greatly reduced NEA funding and was in part a reflection of new areas of research, like “mappings of the social and economic benefits of the arts in specific communities.” But even as arts leaders and funders were learning to better make the case for investing in the arts, the NEA cuts—not just in dollars, but also in moving from “over a dozen divisions focused on specific disciplines to ‘a few generic themes’”—took their toll, and hurt state arts agencies as well, especially around the mid-’90s. However, as government funding declined during this decade, private contributions—from individuals, corporations, and especially foundations—increased substantially.

Lawrence describes arts funding in the 2000s as “holding steady and losing ground.” Against the dot-com bust, the 9/11 terrorist attacks and, later, the Great Recession, the economy and philanthropy were battered in the first decade of the new century. Most troubling for the cultural community is that while other nonprofit sectors have since rebounded, the nonprofit arts sector still has not fully recovered:

Support for the arts has fluctuated during the tumultuous period between 2000 and 2014. Unlike in prior economic downturns, where the arts showed consistency and resilience, an examination of recent arts and culture revenue and public and private funding suggests that the arts as they are traditionally perceived may represent a diminishing priority for foundation and corporate donors. While the nominal value of support for arts and culture in the United States remains impressive, relative to changes in support for other priorities, the arts have unquestionably lost ground.

Other troubling trends include these:

Among the positive trends—and opportunities—are these:

Despite some of the more sobering findings of the data analysis, Lawrence notes that while the 2000s have been challenging for the arts sector, the news is not all bad. In 2014, “individual, foundation, corporate, and government contributions for arts and culture together totaled a staggering $16 billion.”—Eileen Cunniffe