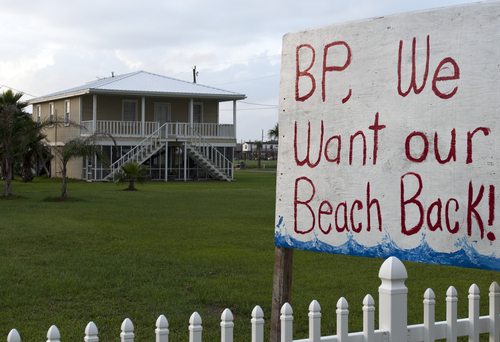 In the largest criminal fine in U.S. history, BP will pay $4.5 billion over the course of five years due its 2010 Gulf of Mexico oil spill. At a press conference, U.S. Attorney General Eric Holder said, “I hope this sends a clear message to those who would engage in this wanton misconduct that there will be a penalty paid.” Three BP officials also face charges, including a manslaughter charge for two of them due to the 11 people who were killed by the 2010 explosion. The settlement includes $2.4 billion for the National Fish and Wildlife Foundation, $350 million for the National Academy of Sciences and approximately $500 million for the U.S. Securities and Exchange Commission.

Rep. Edward Markey (D-Mass.), who serves on the U.S. House Natural Resources Committee, said that the “fines and penalties that the Justice Department has demanded BP pay are appropriate for such a massive disaster…People died, BP lied to Congress, and millions of barrels of oil poured into the Gulf. This steep cost to BP will provide the Gulf coast some of the funds needed to restore the region, and will hopefully deliver some comfort and closure to the families and businesses affected by the spill.”

Greenpeace isn’t quite so thrilled with the outcome. The well known nonprofit environmental organization says, “This fine amounts to a rounding error for a corporation the size of BP.” BP recently announced third quarter profits of $5.43 billion, a jump of 7.7 percent compared to the same quarter last year, so the $4 billion in fines amounts to less than BP’s profit for one quarter of this year.

However, the government settlement with BP does not prevent additional civil claims, be they federal Clean Water Act claims, state or federal natural resources claims or private civil claims, so BP may not be done defending itself on the spill in court for some time yet. BP says it is “prepared to vigorously defend itself against remaining civil claims.” Additionally, a New Orleans federal judge is considering a distinct $7.8 billion settlement with BP and more than 100,000 people and businesses that say the spill harmed them. Will environmental and Gulf Coast nonprofits continue to push for more from BP in response to the largest ocean oil spill in the history of the oil industry, or will they consider the case closed in the wake of the newly announced settlement? –Mike Keefe-Feldman