Gregory to Greenwald on “Meet the Press”: Aren’t You a Criminal? 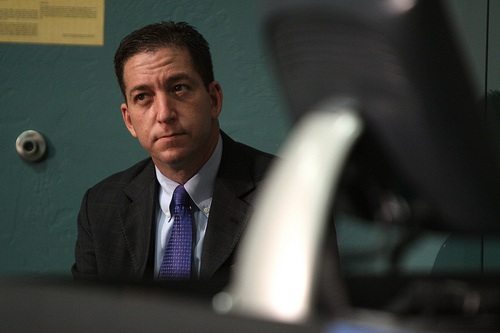 We watched Meet the Press yesterday and were riveted by this exchange between host David Gregory and his guest, Glenn Greenwald, the writer for The Guardian who published Edward Snowden’s revelations about the metadata surveillance programs of the National Security Agency. Their comments are worth extended reproduction and comment:

Gregory: “To the extent that you have aided and abetted Snowden—even in his current movements—why shouldn’t you, Mr. Greenwald, be charged with a crime?”

Greenwald: “I think it’s pretty extraordinary that anybody who would call themselves a journalist would publicly muse about whether or not other journalists should be charged with felonies. The assumption in your question, David, is completely without evidence—the idea I’ve aided and abetted him in any way. The scandal that arose in Washington before our stories began was about the fact that the Obama administration is trying to criminalize investigative journalism by going through the emails and records of AP reporters, accusing a Fox News journalist of the theory you just embraced—being a co-conspirator in felonies for working with sources. If you want to embrace that theory, it means every investigative journalist in the United States who works with their sources [and] receives classified information is a criminal. And it’s precisely those theories and precisely that climate that has become so menacing in the United States. It’s why the New Yorker’s Jean Mayer said investigative reporting has come to a ‘standstill,’ her word, as a result of the theories you just referenced.”

Gregory: “Well, the question of who’s a journalist may be up to a debate with regard to what you are doing and of course anybody who was watching this understands what I was doing. And that question has been raised by lawmakers, as well. I’m not embracing anything. But obviously, I take your point.”

The text is powerful, and the tension between Gregory and Greenwald was visceral. It continued afterwards, as Greenwald tweeted, “Who needs the government to try to criminalize journalism when you have David Gregory to do it?” Gregory responded, again defending his question, explaining, “This is the problem from somebody who claims that he’s a journalist who would object to a journalist raising questions, which is not actually embracing any particular point of view.” Chuck Todd then joined in to defend Gregory and his question. Twitter exploded with attacks on both Gregory and Greenwald, addressing the most exciting on-the-spot news item that Meet the Press has had in many months.

Although it’s not necessarily obvious, there is much in the Gregory-Greenwald dust-up that relates to the nonprofit sector, beginning with a follow-up comment from MSNBC’s Chuck Todd, who remarked that there is a new culture of transparency in this nation that is apparently not much appreciated by the Obama administration—or any previous one, for that matter, although it appears that this administration has gone after whistleblowers and leakers more aggressively than its predecessors. In fact, the Obama administration has an unprecedented effort called the Insider Threat program that’s aimed at getting government employees to ferret out co-workers who might become leakers. Although presented as an effort to prevent harm to security interests, Insider Threat operates in lots of federal agencies with somewhat less clandestine profiles, such as the Department of Education, the Department of Agriculture, and the Social Security Administration. We have to protest against the administration’s “yes we can” answer to its unprecedented efforts against government leakers when, truth be told, the White House and Congress engage in more controlled leaking than the uncontrolled leaking of the “low-level employees” who are the targets of Insider Threat.

The more unfortunate dimension of this for the nonprofit sector is that it emulates the secrecy and the obsession with message control that consumes this administration. Trying to get people to speak on the record about their opinions of, and dealings with, nonprofits and foundations is beyond perplexing. In efforts to track stories about nonprofits and foundations, we encounter plenty of situations in which people are signed, paid, and pledged to non-disclosure pacts, and even if they aren’t, they worry that their on-the-record comments will deep-six their future employment and consulting prospects. People in the nonprofit sector increasingly fear speaking on the record, and some nonprofits and foundations do their utmost to prevent their employees from doing so, whether during their employment or afterwards. The nonprofit sector participates in this environment of non-disclosure that is—or should be—anathema to the sector’s democratic impulse.

As a news entity becoming increasingly dominated by its online identity, Nonprofit Quarterly can see itself reflected in the challenge that the Guardian’s Greenwald is something less than a journalist. Gregory was not particularly subtle in intimating that Greenwald isn’t a journalist, but a blogger, lower on the journalistic food chain. But with the advent and expansion of social media, the boundaries of journalism are increasingly porous. That doesn’t mean that readers shouldn’t demand research, accuracy, and ethics out of the new breed of journalists—citizen journalists—that they presumably expect from the likes of David Gregory and Chuck Todd, but it also doesn’t mean that news venues that provide platforms for citizen or collaborative journalism shouldn’t be taken seriously. Greenwald may have political opinions—don’t we all?—and past alignments, but if he has information as a journalist to impart, the important question is the legitimacy and importance of the information, not whether Greenwald does his reporting online in a blog.

Thanks to both David Gregory and Glenn Greenwald for bringing up some important questions about transparency and journalism in democratic societies.—Rick Cohen