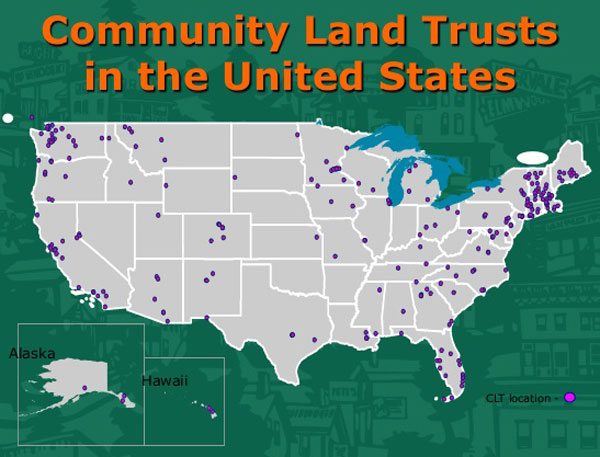 Emily Thaden, Director of National Policy and Sector Strategy at Grounded Solutions Network, the national community land trust trade association, examines the state of the field in Shelterforce. In her analysis, Thaden looks not just at community land trusts, but related forms of “shared equity” housing, such as limited-equity housing cooperatives and resident-owned communities (typically used to own the land beneath manufactured housing).

As NPQ has explained, with a community land trust, a nonprofit holds title to the land and the family buys the house on top of the land. The family has many of the rights of fee-simple homeowners, but because the nonprofit owns the land, the price for which the home can be sold is restricted; most of the equity stays with the nonprofit. The exact split is outlined in the deed; a common formula is for reimbursement for improvements plus a percentage of equity gain (often 25 percent). In return, the family gains stability. During the Great Recession, land trust homeowners faced foreclosure at one-eighth the rate of those in standard fee-simple housing.

While, many new community land trusts have launched in the past year and the field has enjoyed some growth, Thaden concedes that “we have not seen the proliferation of this model of homeownership to the extent that many of us had hoped.”

For instance, Thaden notes that a study from the 1990s had “estimated that approximately 425,000 limited-equity housing cooperatives had been produced. Updating this research, the Urban Assistance Housing Board (UHAB) accounted for 300,000 of those units and found that only 166,608 remained shared-equity co-ops.” The data was incomplete, but, bottom line, “close to half of the accounted-for units had reverted to market-rate housing, remain relatively affordable but no longer have resale restrictions, or were restructured to a different disposition.”

With land trusts, Thaden notes that in 2006, “there were 162 CLTs, 29 start-up CLTs without real estate, and 15 groups planning incorporation…with somewhere between 5,000 to 9,000 owner-occupied homes. [Today] there are roughly 165 CLTs with homeownership units, totaling approximately 12,000 homes.” In other words, the number of people living in community land trust housing has doubled in 12 years—not bad, but still a small number.

Resident-owned communities have also grown. Thaden explains that, “With nine certified technical assistance providers, the ROC USA network represents a total of 210 resident-owned communities that include 13,400 homes in 14 states, such as New York, Minnesota, Wisconsin, Texas, Montana, Utah, Oregon, and Washington. Year-over-year growth in ROCs has been steadily increasing since 2010.”

In short, there are bright spots, but a relative lack of public policy support has made it harder both to preserve existing units and to develop new ones. “Providing training, technical assistance, and stewards requires funding,” Thaden observes. Alexander Roesch notes that UHAB in New York City has developed 54 limited-equity co-ops with a total of 1,425 units since 2005. But it could be more. “I think there is a lack of understanding and political will to make cooperatives. The Mayor’s Office in NYC says they’ve created over 25,000 units of new affordable housing, and I think all those units could be co-op ownership but that is not the model people are using. Instead, they’re all rentals.”

An illustration of how public policy can make a difference comes from New York City. Thaden notes that, “In October 2017, Mayor Bill de Blasio announced that $250 million would be used to prevent subsidized Mitchell-Lama developments from being converted to market-rate apartments. Hopefully, some of this will go toward preserving shared-equity co-ops.”

An added hurdle is the need to raise money for land acquisition at a time when prices in many housing markets, like San Francisco, have reached record levels. As Thaden points out, “the amount of subsidy needed to make homes affordable for purchase has grown since income has not kept pace with escalating housing values.”

But the need is high. “Community leaders, advocates, and policy makers in many places are trying to address racial and economic segregation in their communities,” Thaden observes. “Since shared-equity homes remain affordable in perpetuity, this housing stock is not lost over time like most affordable housing. In fact, it advances integration by ensuring that affordable homes remain in neighborhoods that are experiencing gentrification.”

Taken together, despite the hurdles, 250,000 people live in shared-equity housing, notes Thaden. Gradually, policymakers have taken notice. For instance, last year the Federal Housing Finance Agency implemented a duty-to-serve rule that should make it easier to sell shared-equity and manufactured homes. “Fannie Mae and Freddie Mac,” Thaden adds, have changed rules that should make getting mortgages for shared-equity homes easier too.

Today, Thaden observes, it is rare to hear questions like “What is a community land trust?” or “What is a resident-owned community?” Yet these forms are still not quite mainstream.

Thaden’s response? “There is an easy argument to be made that slightly larger initial investments now will ultimately save the public more money later while maximizing impact since shared-equity homes serve lower-income families. Let’s get to work.”—Steve Dubb