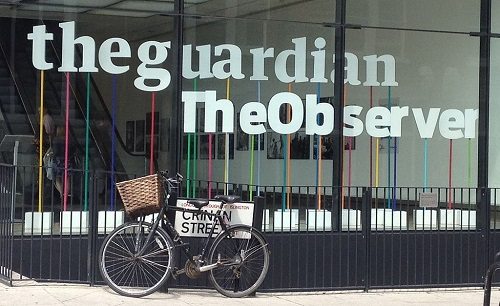 Crowdfunding platform Kickstarter is collaborating with UK news enterprise The Guardian to highlight and amplify independent journalism projects trying to get off the ground. Kickstarter has created a new category on their site dedicated to crowdfunding journalistic efforts. Past journalism-focused efforts have not had an accurate category to be placed in, decreasing their potential reach to funders.

The Guardian has introduced a curated page on the Kickstarter site showcasing independent journalism projects currently trying to achieve their funding goals. A majority of the highlighted ventures currently listed have already reached funding. The featured projects encompass a wide variety of focuses, from an independent project investigating “whether big agriculture is hiding instances of animal cruelty” to a local San Francisco nonprofit journalism organization seeking funding for a bicycle pilot program to expand their distribution network.

In January of 2014, The Guardian launched their own platform to amplify independent journalism, Contributoria, branded as “community-funded, collaborative journalism.” Contributoria is a member-supported platform that channels the collaborative power of Wikipedia by bringing writers together to collaborate on all facets of journalism—from editing to publishing.

Crowdfunding has become a vital resource in the constantly changing and evolving journalism scene, and NPQ has been following the work of similar innovations. The Guardian’s head of culture & interim network editor commented on the exciting new curating collaboration: “At The Guardian, we’re excited by new forms and models of journalism, and Kickstarter’s focus on the fourth estate is something we’re happy to support by helping pick the projects that we think look most interesting.”—Aine Creedon