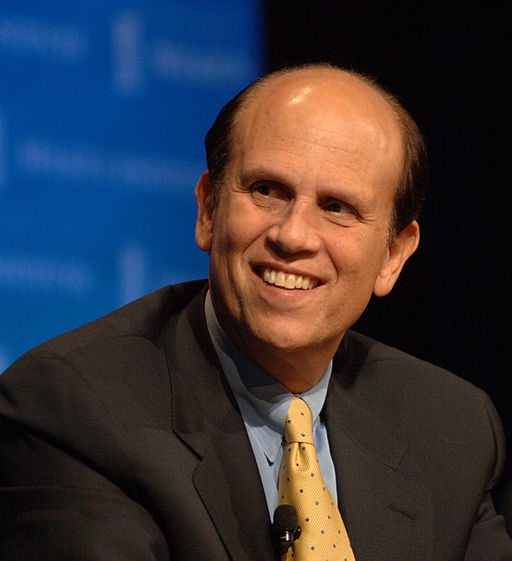 Our sincerest apologies to the letter-writer to the Washington Post, whose comment we read in the print edition but cannot find online. He pointed out that the Washington Post’s laudatory coverage of Michael Milken’s $50 million in gifts to George Washington University—$40 million from the Milken Institute and another $10 million from the Milken Family Foundation—failed to include some important context. Although the Post acknowledged that Milken was known as the “junk bond king” (actually in a reprinted Associated Press story about the record donations to GW), the Post’s own coverage of Milken himself in this story called him “a financier with numerous philanthropic ventures in health and education.” In response to this burst of philanthropic generosity, GW is renaming the school the “Milken Institute School of Public Health” and awarding the head of the school, Lynn R. Goldman, the endowed title of “Michael and Lori Milken Dean of Public Health.”

The multi-billionaire Milken earned huge amounts as the head of the high-yield bond fund at Drexel Burnham Lambert, which itself declared bankruptcy in 1990. As the WashPo letter writer referenced, Milken was charged with illegal trading and indicted for fraud, tax evasion, and racketeering, earning himself the distinction of one of the first non-organized crime people to be hit with RICO charges. Eventually, despite high-priced public relations and legal teams on his side, Milken had to plead guilty to a number of securities and tax violations, earning him $200 million in penalties, $400 million in a settlement with the Securities and Exchange Commission, $500 million in a separate lawsuit to compensate Drexel investors, and a jail term of 10 years, of which he served 22 months.

Milken’s legal and ethical history doesn’t seem to trouble GWU, rewarding him with a school name in return for his philanthropic generosity. Other schools haven’t been quite so forgiving with felonious philanthropists of Milken’s ilk. For example, one of Milken’s most prominent business dealings concerned Ivan Boesky, who had become rich on junk bond trading but pleaded guilty to SEC charges of insider trading and, as part of his confession, provided information that helped bring Milken to justice. Princeton, for its part, returned a large gift from Boesky meant to build a Jewish Center at the university. Other schools have been even harsher, such as Seton Hall University removing Tyco CEO Dennis Kozlowski’s name from a building in 2005 after his convictions for “looting his company.”

Milken apparently likes his family name on the beneficiaries of his philanthropic largesse: the Milken High School of the Stephen A. Wise Temple in California, the Milken Educator Awards, the Milken Institute Global Conference, the Milken Exchange on Educational Technology, the Milken-Penn GSE Education Business Plan Competition, the Milken Institute Review, and the Milken Institute Young Leaders Circle, just to name a few, without including the Milken programs and organizations ostensibly named after Michael Milken’s brother Lowell. Some places are not comfortable with being named after a convicted white-collar felon. There were concerns at the Stephen A. Wise Temple at the time of its naming of a high school after Milken (the school countered that it was naming the school after the entire Milken family, not just the junk bond trader) and at UCLA when the Law School put Lowell Milken’s name on the Institute for Business and Law in gratitude for a $10 million gift; the federal government indicted Lowell in connection with his brother’s bond trading illegalities, but dropped charges against him when Michael Milken pled guilty to the securities charges.

In American philanthropy, and certainly at George Washington University, the Benjamins rule. One of the most expensive colleges in the nation, GWU’s reputation on this score has been amply demonstrated, most recently in a ProPublica investigation that revealed that the school fibbed about its admissions preferences for students from wealthy families. Although Milken may have made (we choose not to use the word “earned”) much of his wealth on the dodgy side of Wall Street, he has used a portion of his wealth both before and after his conviction for philanthropic activities in the areas of health and education. That unfortunately now-anonymous letter writer to the Post was simply trying to say the press should recognize who and what Milken is—or any large donor, for that matter—and not let the philanthropic gift, no matter how beneficial, whitewash the donor’s potentially seamy background.—Rick Cohen