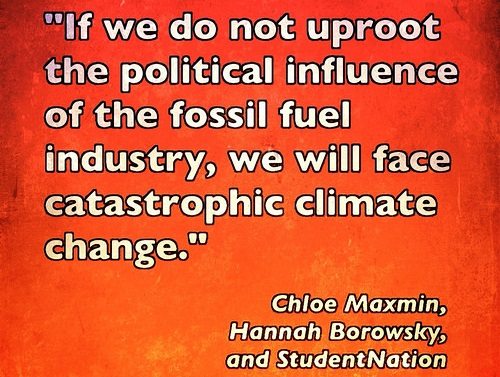 The Guardian reports that Harvard’s endowment increased sevenfold its oil and gas investments in the third quarter of 2014 even as a campaign pressures the university to divest in fossil fuels. The increased investments, which may be conservatively reflected here, reportedly amount to tens of millions of dollars. The endowment is already the biggest in the world at $32.7 billion.

The new investments increased Harvard’s stake in these industries from $11.8m (£7.8m) to about $79.5m, according to activists.

The biggest investment at $57.4m was made in Anadarko Petroleum, which was implicated in and fined for the Deepwater Horizon disaster. Other investments have been made in Concho Resources Inc. ($9.6m), Pioneer Natural Resources Inc. ($9.3m), Range Resources Corporation ($2.2m) and WPX Energy ($979,000), all of which are involved in fracking.

Chloe Maxmin, a co-founder of Divest Harvard, analyzed the investments and said that most of Harvard’s endowment is not held in direct investments, and therefore is not reflected in the SEC filings on which her analysis was based.

The new investments put the university out of step with a small but growing number of universities and philanthropic institutions, such as Stanford and the Rockefeller Brothers Fund, which are moving to review their holdings and divest of fossil fuels, according to a letter penned by five faculty members.

“In striking contrast to these other institutions, Harvard has newly invested tens of millions in publicly traded fossil fuel companies,” the five Harvard faculty members wrote. “Can putting tens of millions in companies like Anadarko be regarded as responsible sustainable investing—investing that befits a charitable corporation dedicated to scientific truth and ethical education? Such investments… signify an investment policy that is profoundly indifferent to its consequences.”

“We are among a growing number of concerned faculty who question the idea that investment returns are justified at any cost, including the enormous cost our students and future generations will need to pay for what the fossil fuel industry is doing now and—more importantly—for what it is planning and lobbying to do, with writing checks to political organizations a key part of that planning.”

Last year, seven students filed a lawsuit against the university, arguing that the university’s refusal to divest “amounts to mismanagement of public charitable funds,” according to Alice Cherry, one of the students bringing the action. “The language of the charter says that Harvard needs to protect the education and advancement of youth so that’s something we think is inconsistent with fossil fuel investments.”—Ruth McCambridge