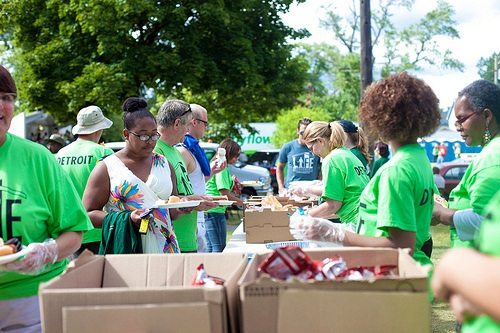 Given all the attention to the work of foundations, the city, and the state legislature to save the Detroit Institute of Art and to restructure the city’s underfunded public pension funds, it is easy to overlook the efforts to revive this troubled city are also occurring in local neighborhoods, often as a result of the dogged efforts of local nonprofits.

A nonprofit called Life Remodeled has committed to renovating at least one Detroit Public School system school each summer. It is starting with renovations at Cody High School, providing funding and construction services for “painting, landscaping, window replacement and roof, electrical and plumbing repairs…[plus] at least one classroom renovation and installation of a new track and football field at the high school.” In addition, the nonprofit will renovate the homes of some 20 students’ families in the area, demolish another 10 burned houses, and do “light facelifts” at the nearby Mann and Henderson elementary schools. It counts. The current DPS deficit is at $38.8 million and is expected to climb to $120 million in fiscal 2014. DPS Emergency Manager Jack Martin acknowledges that without Life Remodeled, the school system could not undertake the Cody High School project.

Beginning in Rouge Park, a nonprofit called Greening of Detroit is planting several hundred trees with the aim of getting 1,300 planted by mid-June. Overall, the nonprofit hopes to get 2,400 into the ground this spring with the help of corporate partners and community volunteers. In a similar vein, Detroit Mayor Mike Duggan is working with churches and community groups to get them to adopt neighborhood parks, enhanced by the city’s plan to double the number of seasonal workers it will assign to park maintenance this year.

Matthew Naimi is an entrepreneur who runs a business called Green Safe Products, involving the sale of biodegradable food service supplies. He uses the profits from that business to run Recycle Here, a nonprofit recycling operating he started seven years ago because Detroit is the largest city in the U.S. without municipal recycling. “I work every day to help fix Detroit,” Naimi says, “but if we ever complete the job, I’ll find somewhere else to go.” With some years in business, Naimi is a pretty successful entrepreneur, but Detroit also has nonprofits such as Hatch Detroit which are spurring “pop-up” shops (you know, you see them as the seasonal kinds of shops like Halloween goods stores that “pop up” in vacant storefronts) to test entrepreneurial ideas and help the most successful ones move from pop-up to full-time brick-and-mortar.

For much of the nation, Detroit has become a late-night comic’s punchline, a symbol of a city that can’t seem to get anything right. What people don’t get is that Detroit contains a committed community of nonprofit organizations that are willing to do what it takes to put the Motor City back on the road to recovery. One can only hope that Detroit’s foundations and state and federal public agency funders don’t forget to support and reinvest in Detroit’s nonprofits to ensure that they survive as the infrastructure for the civic revival that the city will need in order to recover and eventually prosper.—Rick Cohen