Hey, America: Let’s Talk about What Divides Us 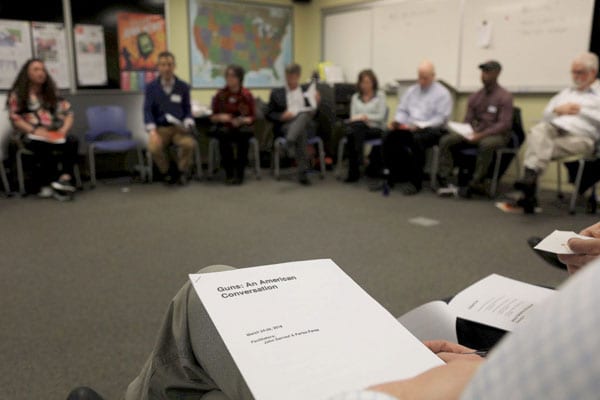 After the 2016 election, journalists Jeremy Hay and Eve Pearlman saw a need for better dialogue among ideological opponents. “Just the increase in discord, and real lack of civility and decline in trust in media,” Pearlman explains. “We started thinking, what could we do to do something different?”

Their answer is what they call “dialogue journalism.” That is, Pearlman says, “going to the heart of divides. Bringing communities together in dialogue across difference, supporting those conversations with fact.”

Their nonprofit, Spaceship Media, works with news organizations to facilitate discussions around the nation’s most divisive topics, like gun control, gentrification, and immigration. The conversations are constructed with the underlying belief that there is power when you provide a place where people can be curious.

In this podcast, we speak to two people who were selected to be part of a closed, moderated Facebook discussion on gun control, which Spaceship Media organized. Eric Truax introduces himself as an NRA member and Second Amendment supporter; Asheenia Johnson as an anti-violence activist. They both admit they held their own assumptions about those on the opposite side of the gun debate when they applied to take part in the spring. And, as you can hear, they both agree that they learned things about themselves, and about the other side, from the conversation.

Featured Image: People from around the nation took part in the “Guns: An American Conversation” workshop in Washington, D.C. in March 2018. Credit: Seth Siditsky/Advance Local