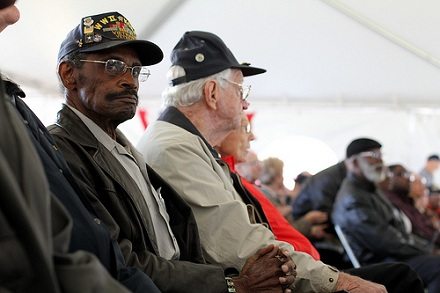 It may be that the numbers tell the story behind our analysis of the tepid support of mainstream U.S. foundations for veterans and their families. The Daily Yonder’s Bill Bishop takes U.S. Census data to show that the areas of the country with the highest proportions of military veterans (and presumably their families) are rural and exurban counties.

His chart of the counties with the highest proportions of veterans in the adult population classifies eight of the top ten as rural, including Fall River, S.D. (32.4 percent), Esmeralda, Nev. (27.8 percent), and Haines, Alaska (26.6 percent). The two “urban” counties with the highest proportion of veterans were Liberty, Ga. (26.5 percent) and Okaloosa, Fla. (24.0 percent).

Bishop observes, “The cities where most of the financial, political and military decisions are made are the places where you are the least likely to have a vet as a neighbor.”

Compare those to the foundations in the entire states that are home to the six counties with the top veteran population proportions: South Dakota (121 foundations with $528.5 million in assets), Nevada (449 foundations with $2.8 billion), Alaska (78 foundations with $627.5 million), Georgia (1,455 foundations with $11.0 billion in assets), Missouri (1,318 foundations holding $8.8 billion), and Idaho (216 with $1.1 billion). On the NPQ website, we have often written about the short shrift that foundations have given to rural areas in part because of their lack of direct contact with rural communities and rural people. It shouldn’t be surprising to find that the same may be true with veterans. Bishop’s contention about the places where financial, political, and military decisions are made could have been modified and expanded to include places where the nation’s philanthropic decisions occur: they aren’t rural and they are more likely than not to be places with lower than average veteran populations. The same probably also applies to people who served (or who have family members still serving) in Iraq and Afghanistan. If they tend toward living in rural communities, they are likely to be on the short end of foundation attention.

That doesn’t mean that all urban foundations are not paying attention to the needs of veterans and their families. At the recent Council on Foundations annual conference, the convener of the panel discussion on foundations and the military was a senior person at the Blue Shield of California Foundation, which is located a few blocks from the Embarcadero in San Francisco.  One of NPQ’s readers wrote us about the Kessler Foundation, headquartered in East Orange, N.J., which we are told has invested $2 million in a project with the National Organization on Disabilities to establish an employment case management system for veterans with significant disabilities, a venture supported by the Ford Foundation, among others.

The point still stands. If foundations aren’t paying sufficient attention to rural America, they are likely to be underfunding rural communities—communities with disproportionately high numbers of military veterans.—Rick Cohen