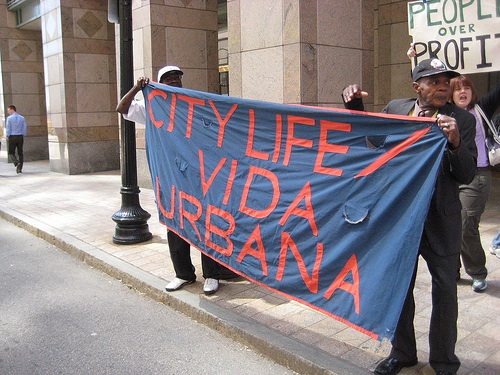 The blending of nonprofit activism and hip-hop isn’t new, but we haven’t seen much specifically directed at the foreclosure crisis. At the Boston-based tenant and housing advocacy nonprofit City Life/Vida Urbana, hip-hop artist Twice Thou has done a music video targeting bank lending practices that have led to the foreclosure crisis. Twice Thou’s real name is Antonio Ennis, and he joined City Life/Vida Urbana as an organizer in 2011 when he had to confront a foreclosure at the hands of Bank of America affecting him personally. Twice Thou’s video, “The Bank Attack,” is the title track of a 16-track album with other songs such as “Bankersville USA,” “Move Your Money,” and “Hush Money.”

It is interesting, however, to discover that Ennis’ record company, The BuyBack Initiative/Music Group, is looking to buy foreclosed homes from banks or investors with the aim of “selling them back to the owners at the current real-value. By initiating this venture, TBBI/MG aspires to partner with Private Investors/Donors to help every family drowning in debt with an underwater mortgage stay in their home.”

Presumably, Ennis’s model fits the agenda of City Life/Vida Urbana, which has a slate of upcoming activities that includes a “Radical Organizing Conference” based around City Life’s “organizing model, which aims to undermine market ideology while it helps people fight for their homes.” City Life/Vida Urbana’s articulation of its organizing model has a number of strongly worded components:

2) “…Radical organizing must be organizing…. No radical challenge can emerge from fostering reliance on professional advocates or service providers. But since we are organizing those directly threatened with displacement, we also recognize that good services (eg providing information) and good advocacy (going to court with folks) are vital parts of a program that emphasizes organizing. Our current bank organizing has developed the concept of ‘collectivized casework’ to a higher level. Hundreds come to weekly meetings to get help with ‘their cases’ and find that help in collective action…

4) …Challenge the right of profit….We live in a real estate system so corrupt that to demand a balance between real estate profit and human need is to make a system-challenging demand, an anti-capitalist demand. The policy demands raised by City Life challenge the role of profit.

5) Expose other assumptions of real estate capitalism…We don’t try to convince big landlords to do the right thing. We know that won’t work. We raise moral issues in order to create the space for our people to fight.”

What do you think of the blend of Twice Thou’s hip-hop music and the nonprofit City Life’s radical organizing model?—Rick Cohen