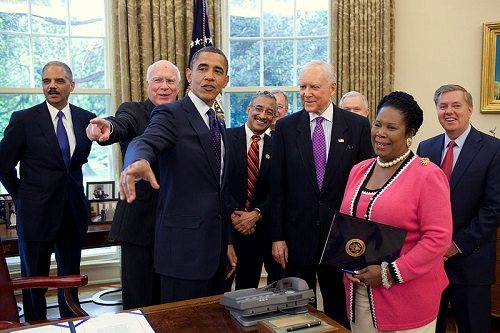 In case you have any doubts about this country’s need to address its rate of incarceration, here is a simple graph to bring the point home. 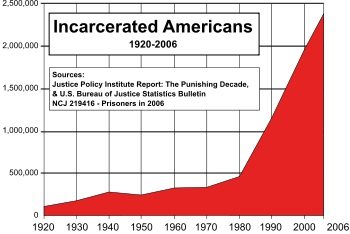 The U.S. prison population is the largest in the world, comprising 25 percent of the world’s prison population. Some of the rapid rise in those numbers is due to mandatory sentencing in drug offenses. Now the Obama administration is taking the issue on, but its very active partner in the effort is a strong coalition of nonprofits that have been working toward this day for many years.

In 2010, Obama signed the Fair Sentencing Act, which reduced the differences between mandatory minimum sentences for crack and powder cocaine. That disparity was considered by many to be race-based; since the 1990s, 80 percent of those imprisoned for crack have been black. Still, although the sentencing from that point on was adjusted, there were 9,000 people who could have been released had the act been made retroactive. According to Al Jazeera, criminal justice and civil liberties groups petitioned the government to address the problem, but they worried that things were not moving to prepare for what would be a massive operation.

Then, early this week, Attorney General Eric Holder released a video in which he announced the Obama administration’s Clemency Project 2014. In it, he said, “In 2010, President Obama signed the Fair Sentencing Act, reducing unfair disparities in sentences imposed on people for offenses involving different forms of cocaine. But there’s still too many people in federal prison who were sentenced under the old regime and who, as a result, will have to spend far more time in prison than they would if sentenced today for exactly the same crime. This is simply not right.”

The administration is making changes to personnel, including to the pardon office, which now has new leadership to facilitate what is expected to be, as the New York Times estimates, the most significant clemency effort since Presidents Gerald R. Ford and Jimmy Carter offered amnesty to Vietnam War draft evaders.

Standing at the ready for what may be an unprecedented effort is a working group described below, as it was posted on the ACLU website:

Clemency Project 2014, a working group composed of the Federal Defenders, the American Civil Liberties Union, Families Against Mandatory Minimums, the American Bar Association, and National Association of Criminal Defense Lawyers, as well as individuals active within those organizations, wholeheartedly supports Cole’s announcement and the Justice Department’s plans to restore the integrity of the clemency process.

“The doors of the Office of the Pardon Attorney have been closed to petitioners for too long. This announcement signals a truly welcome change; the culture of ‘no’ that has dominated that office is being transformed,” said Mary Price, FAMM General Counsel. “We stand ready to assist in any way we can to support petitioners and bring their cases to the attention of the President.”

Clemency Project 2014 launched in January after Deputy Attorney General James Cole asked the legal profession to provide pro bono assistance to federal prisoners who would likely have received a shorter sentenced if they’d been sentenced today.

NACDL President Jerry Cox said, “Clemency Project 2014 marks the beginning of the end of the age of mass incarceration. We must seize this historic opportunity to start the process of remedying decades of cruel and unnecessarily harsh sentencing policies. I call upon the nation’s lawyers, especially the criminal defense bar, to rise to this challenge in an unprecedented effort to restore hope and the prospect of an early return to freedom for the countless deserving individuals who are languishing in federal custody.”

Clemency Project members will collaborate to recruit and train attorneys on how to screen for prisoners who meet the criteria laid out by the deputy attorney general. Pursuant to the criteria announced today, candidates eligible for clemency must be:

“Federal defenders have advocated for reform of the criminal justice system for many years, and we wholeheartedly endorse the President’s commitment to lowering the sentences of prisoners who are serving unduly harsh sentences through the clemency process,” said Michael Nachmanoff, Federal Public Defender for the Eastern District of Virginia. “In recent years, federal defenders have assisted thousands of defendants to reunite with their families through the crack retroactivity process, and we are eager to work with the other organizations affiliated with the Clemency Project 2014 to help many others serving unfair sentences that would not be imposed today.”

While Clemency Project 2014 will focus on those cases that clearly fit the broad criteria described by Deputy Attorney General Cole, the groups stress that there are many other federal prisoners whose sentences are grossly disproportionate to the crimes for which they were convicted. The groups will continue to urge the Department of Justice and President Obama to vastly expand use of the clemency power to correct widespread injustice. Similarly, each organization participating in the Project supports legislative action to curtail sentencing laws that continue to cause unjust sentences.

Clemency Project 2014 looks forward to support and participation from other legal and community advocacy groups, and gratefully recognizes the early support of the National Action Network, the Lawyers Committee for Civil Rights and the National Asian Pacific American Bar Association, as well as state bar associations, including the New York State Bar Association, before which Deputy Attorney General Cole first announced this initiative last January.