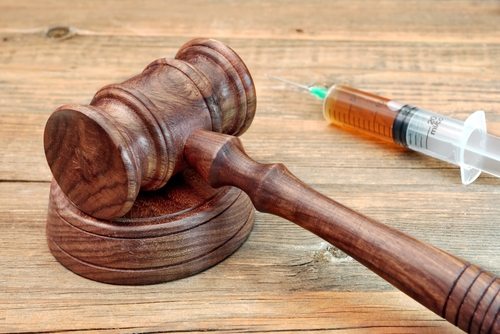 Prior to leaving office, outgoing U.S. Attorney General Eric Holder has taken a clear position behind halting executions nationwide until the Supreme Court has rendered a decision on the constitutionality of certain methods of lethal injection. For the first time since 2008, the Supreme Court announced this past January it would review the protocols surrounding the administration of the lethal injection and whether it violates the Eighth Amendment, barring cruel and unusual punishment.

“I think fundamental questions about the death penalty need to be asked,” Holder said at the National Press Club on Tuesday. And among them, the Supreme Court’s determination as to whether or not lethal injection is consistent with our Constitution is one that ought to occur. From my perspective, I think a moratorium until the Supreme Court made that determination would be appropriate.”

While Holder said he was speaking for himself and not representing the Obama administration, his stance is unsurprising given his staunch opposition to the death penalty. Throughout his time at the Justice Department, Holder conducted extensive reviews looking into the use and application of the death penalty.

His support for a moratorium may already be having an impact around the country. In past few days, Pennsylvania has instituted an indefinite moratorium on the death penalty and Florida has halted an execution pending the Court’s decision. Richard Dieter, executive director of the Death Penalty Information Center, also remarked on the potential influence Holder’s voice could have on the issue. “All of this has symbolic impact,” Dieter observed, especially given the record number of wrongful convictions that were overturned last year, hitting a high of 125.

The Supreme Court’s decision comes only weeks after the Court refused to halt the execution of Charles Warner, the first inmate to be executed after Oklahoma’s botched execution of Clayton Lockett last April. Lockett fell unconscious after being administered the first of three drugs; moments after, he began writhing on the gurney and breathing heavily. He died 43 minutes later of a heart attack, in an apparent reaction to the drugs that were administered. The execution once again reignited the debate whether such an execution where an inmate is clearly in pain falls under cruel and unusual punishment.

Following Warner’s execution, the Court agreed to stay three other executions in Oklahoma until after the constitutionality of the method had been considered.

The lethal injection has had a long and winding road to what it has become now. Until 2009, most states used a three-drug combination when administering lethal injections. The first drug is an anesthetic (sodium thiopental, pentobarbital or, most recently, midazolam), the second drug is a paralytic, and the third drug, potassium chloride, will stop the heart. With drug shortages, more and more states have turned to experimental, untested combinations, resulting in several botched executions.

Midazolam has been at the heart of the issues in at least three other executions last year and appears to be one of the reasons the justices are looking into protocol, as it may not properly anesthetize inmates against pain. The same drug was administered during an Arizona execution that lasted over two hours, leaving the inmate gasping. Ohio has decided against using the drug after the state itself had an inmate choke and gasp after having been administered the same sedative as part of an experimental cocktail. Florida halted its execution last week because it also uses midazolam as the first of the three drugs.

The last time the Court reviewed and rejected a challenge to the use of lethal injection in executions, the Justices found the possibility of an inmate experiencing pain during an execution does not violate the Eighth Amendment. “Simply because an execution method may result in pain, either by accident or as an inescapable consequence of death, does not establish the sort of ‘objectively intolerable risk of harm’ that qualifies as cruel and unusual,” wrote Chief Justice Roberts. Instead, the execution must have the intent of causing pain to be in violation.

However, the three-drug protocol in place in 2008 when the subject was under review has changed, given shortages of the drugs. Therefore, it seems that a revision of the protocol, or an overhaul of the lethal injection method entirely, may be necessary.

The federal government’s own use of capital punishment has been in limbo for more than a decade. In 2011, the Justice Department announced it would halt all executions due to the lack of sodium thiopental. The last federal execution was in 2003.—Shafaq Hasan