Holder to AGs: You Don’t Have to Defend Gay Marriage Bans 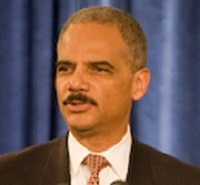 Comments made on Monday by U.S. Attorney General Eric Holder have raised issues and questions about the responsibility of his state counterparts to defend laws they may disagree with. As the battle over same-sex marriage is waged in state legislatures around the country, Holder stated that he believes state attorneys general are not obligated to defend laws they believe to be unconstitutional.

Holder was careful not to be directive in his comments. Instead, he suggested that on a case-by-case basis, if a core constitutional issue is in play, the attorney general should consider the implications very carefully. Holder suggests there would be situations where refusing to defend the state law would be entirely appropriate. In the case of same-sex marriages, Holder believes that issues of equality are being raised and this is essentially a continuation of the civil rights movement.

Holder’s comments bring the Obama administration into what has been a fight fought at the state level up until now, and he is being accused of interfering in something that the states should decide. Constitutional amendments against same-sex marriage are being challenged in the courts of a number of states, and it appears inevitable that the Supreme Court will eventually have to make a determination.

Ironically, one of the states where the laws are being is challenged is Wisconsin, whose attorney general, J.B. Van Hollen, a Republican, is president of the National Association of Attorneys General, a group Holder was to address the day after making his remarks. Van Hollen immediately decried Holder’s comments, arguing that his job is to uphold his state’s constitution, whether he agrees with the laws or not. He also says that it is inappropriate for Holder to tell state attorneys general what to do.

The issue Van Hollen raises was also brought up in connection with a case from January of this year in Virginia where the attorney general refused to defend his state’s ban on same-sex marriages. In that case, Attorney General Mark Herring stated that he believed the law violated the United States constitution and, therefore, he would not uphold it or defend it in court. It is no surprise that organizations in opposition to same-sex marriages immediately came out against Herring. The Family Foundation, for example, argued that he did not have the right to choose which laws he would defend and which ones he won’t; his job is to defend the laws that have been adopted.

What’s in question is what the attorney general’s responsibility is at the state level. The oath that Van Hollen took states that he will to the best of his ability “support the constitution of the United States and the constitution of the state of Wisconsin.” This appears to give the attorney general the responsibility to measure a state law against the U.S. constitution, which is the supreme law of the land. In that context, Holder’s comments seem quite reasonable.

There are four attorneys general who are refusing to defend their state’s laws against same sex marriage, all of whom are Democrats. Attorneys general in California and Colorado had earlier refused to defend such bans, which were ultimately overturned.—Rob Meiksins