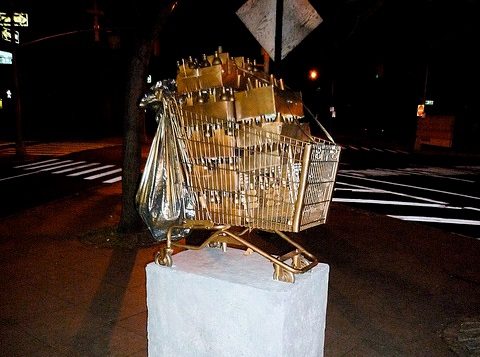 In the last decade, the Canners’ Campaign worked to protect the rights of homeless people in New York City who collected discarded cans and bottles and brought them to redemption centers and supermarkets to redeem them for five-cent deposits. In many cases, canners were harassed by the police and rebuffed by supermarkets in violation of the New York State Bottle Bill. Five cents for a bottle might seem to be inconsequential to some readers, but others know that many homeless persons are subsistence workers for whom the dollars they earn by collecting empties may be the difference between being able to buy food or going hungry, getting a room or sleeping on the street. Last year, Francis X. Clines wrote in the New York Times that an estimated 5,000 canners in New York City pick through garbage piles for redeemable cans and bottles every night.

In that piece, Clines mentioned Sure We Can, a nonprofit operating the only not-for-profit redemption center in the city at McKibben Street in Brooklyn. Sure We Can’s founder, Sister Ana Martinez de Luco, planned to turn the McKibben center into a cooperative governed by a board of canners.

Now, Sure We Can might have to make a choice about whether it can continue its operations as a can and bottle redemption center. After years of paying year-to-year leases, Sure We Can signed a five-year lease to pay $4,000 a month, or $48,000 a year, for the 13,000 sq. ft. McKibben Street lot, which contained a barn for the recyclables and lockers for the personal belongings of the canners. Last month, however, the owner of the lot, the family of one Otto Perez, offered Sure We Can a payment of $50,000 to terminate the lease because a commercial entity had offered $3.8 million to buy the property.

The story by Serena Dai in DNAinfo implies that Sure We Can seems open to taking the payment and finding an alternative location. That may be difficult, both in terms of cost and geography. Sister Ana said that the nonprofit has had trouble with neighbors at previous locations—the typical charges that it was attracting the homeless to sleep on the street—but has not had that kind of trouble on McKibben Street. Dai indicated that the nonprofit is also looking to foundations and other donors with an eye toward perhaps buying the location in place of the commercial purchaser. That would be a big stretch for an organization whose total revenues from grants and contributions were $7,737 in 2011 and $14,572 in 2012 (out of total revenues of $235,554 in 2011 and $224,849 in 2012, over 90 percent attributable to the program service revenue it gets as its share of the canners’ recyclables).

The homeless who collect empty cans and bottles often push their wares in shopping carts that they call “$60 wagons,” the typical value of the empties in a full cart. It is a difficult, strenuous, often demeaning job. A group like Sure We Can offers something better to these homeless social entrepreneurs, which these homeless people surely are, given their labor scavenging through piles of garbage. Dealing with an excruciatingly expensive real estate market, groups like Sure We Can face financial challenges that must appear at times just about insurmountable.—Rick Cohen