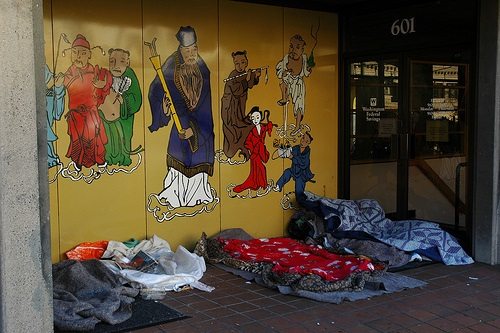 Homelessness in the U.S., according the U.S. Department of Housing and Urban Development, has declined by 4 percent between 2012 and 2013, but somehow grew in New York City by 13 percent. That is a hugely different dynamic. Can it be explained?

Sometimes, the percentages camouflage what might be really going on. The nation’s homeless population, according to HUD, is 610,042. Of that total, 394,698 are considered “sheltered” and 215,344 are essentially living on the streets. These numbers are based on a HUD estimate of one night’s count in January 2013. That is essentially a city of homeless people.

New York City and Los Angeles alone account for one-fifth of the nation’s homeless population. Five states—California, Florida, New York, Massachusetts, and Texas—account for half of the nation’s homeless. Despite the national decline in officially counted homeless, it is hardly a consistent pattern from state to state. New York State and California have witnessed significant increases in homelessness since 2010. Since 2007, homelessness has increased by 24 percent in New York.

We have written frequently in the NPQ Newswire about the successes of cities that pursue “housing first” strategies to address homelessness. Mayor Michael Bloomberg seemed to think differently about the appropriate policy prescription, opining that “some people have been coming into the homeless system, the shelter system, in order to qualify for a program that helps you move out of the homeless system”; that is, a program operated by the city, funded by the state, that provided rental subsidies to allow people in shelters to move to affordable apartments.

The program that sparked Mayor Bloomberg’s concerns about people volunteering to be homeless so that they could then be rescued from homelessness was terminated due to a lack of state funding. New York City’s newly elected mayor is Bill de Blasio, who was elected partly for his contrast with the two previous mayors in his concern for New York City’s poor. His deputy mayor for health and human services, Lilliam Barrios-Paoli, pledged that the city will find some mechanism to restore the rental subsidies.

Nonetheless, so far the Cuomo administration hasn’t restored its funding to this program, despite a general awareness that putting the homeless into housing rather than shelters is the most effective response to homelessness. In Massachusetts, where there has been great success with the “housing first” strategies promoted by the Paul and Phyllis Fireman Charitable Foundation among others, it is surprising to read that the number of homeless placed in motel and hotel rooms reached a new record level in early December, surpassing the previous record that was set only one month before. In Austin, Texas, the city’s official homeless shelters have been overflowing, forcing homeless to wait for a lottery for placement in temporary beds at churches and recreation centers.

This country knows what to do about homelessness. The success of “housing first” programs is well proven for both homeless individuals and homeless families. How does one explain, then, the findings of a U.S. conference of mayors that homelessness in 25 large and midsized cities has increased in just the last year, with the number of homeless people in Los Angeles up 26 percent and homeless families in Chicago up more than 11 percent? Overall, against the HUD report of a 4 percent decline across the nation, the conference of mayors found an average 3 percent increase in homelessness in the 25 cities.

We would hypothesize the following: Despite the continuous flow of press reports about the nation’s purported slow-but-steady economic recovery, there is no recovery for the nation’s very poor; their economic conditions have deteriorated while the nation’s economy has improved. City and state budget cuts and a constantly shrinking federal domestic discretionary budget have led to a reduction in the funding for programs that we know work and work well for reducing homelessness. This nation could be making much greater progress on tackling homelessness than it is, especially in the big cities, where homeless is undeniably on the increase. Unfortunately, we’re making a societal choice, and it is embarrassingly bad.—Rick Cohen