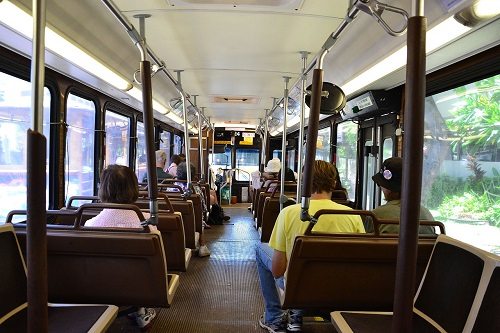 Homelessness is a complex issue, and the responses of cities throughout the country to the dilemma seem to be polar opposites. Some try to address the core of the issue, often rooted in cycles of inescapable poverty, while others try to merely brush the problem under the rug.

Honolulu is certainly not one of those latter cities. This week, the city announced it would use old, out of commission city buses and transform them into transitional housing for the homeless people in the city. The project emerges out of a partnership with the city and architecture firm Group 70 International, which will be renovating the buses into living and recreational areas while other buses will be outfitted solely with bathrooms and showers.

The effort will rely heavily on volunteers to help convert the buses into livable spaces, and the materials are going to be donated by local and national organizations. “The whole community is coming forward to help this effort,” said Ma Ry Kim from Group 70 International to local news station Hawaii News Now.

“We, when we started, did not even realize, number one, what a need there was for this. And number two, how many different people can benefit from it,” said Kim. “But mostly, how many people want to help.”

While the group is still figuring out exactly who will be regulating the buses and where they will be located, there is hope that the buses will be a success. One need only look to San Francisco’s similar conversion project putting buses to use to battle homelessness. Nonprofit startup Lava Mae operates shower units in renovated buses to help provide a service lacking in the city: enough hygienic showers for the homeless population.

With only seven showering areas with about 20 stalls each for the over 3,500 homeless population, Lava Mae founder Doniece Sandoval found and filled a niche with her mobile shower. Again, homelessness is a complex issue, and while these buses will not eliminate the problem, they will help more people.

“There’s no doubt about watching someone go in and seeing them come out — it’s like they’re different people,” Sandoval told the San Francisco Chronicle back in February. The project has garnered much support and donations. She plans to expand the project to three more buses.—Shafaq Hasan