How Philanthropy Can Support Black Workers

Author’s Note: When I originally wrote this article for Black History Month, we were beginning to learn about the coronavirus. Now people across the world are facing uncertain circumstances and major disruptions at a scale we have not seen before. This global pandemic will have far-reaching and long-lasting effects on our lives, our health system, and our economy. Philanthropy and government must act quickly and bring all our best resources to bear, especially for those in low-wage jobs who were living on the margins before the crisis hit. Our population and our economy are counting on it.

My career in philanthropy started at the Charles Stewart Mott Foundation in Flint, Michigan. While Flint has been in the news for the past few years for its water crisis, it was once a thriving area, with a reputation as the most affluent city in Michigan. Its local economy was powered by General Motors (GM), which employed about half of the population. In its heyday, GM accounted for roughly 90 percent of income from wages, salaries, and shareholder holdings. But Flint’s fortunes eventually took a dramatic turn. By the time I arrived in the late 1990s, economic misery and social decay cast a shadow over the city, disproportionately impacting its Black population.

Flint’s economic narrative is a common one for many American cities, particularly for those with Black populations. It begins with the economic highs of job growth, improved access to goods and services, enhanced buying power, and improvements in quality of life, followed by a dramatic tumble into extreme wealth inequality and economic insecurity.

Such economic booms have historically meant fewer jobs, less earnings and wealth accumulation, and less job security for Black workers than their white counterparts. And subsequent economic busts have hastened the shift of Black workers to the ranks of the unemployed and financially fragile. We are seeing this play out right now as we weather the extreme economic meltdown caused by the coronavirus pandemic. Everyone is taking a financial hit, but the slope of our current economic turmoil and disparity will likely be steeper for most Black families.

During the Great Migration of the early 20th century, millions of Black Americans fled the terrorism of the South for the relative sanctuary and opportunity in northern, midwestern, and western cities. While many found work, they also faced unsafe working conditions, low wages, limited mobility, and harmful practices like hiring discrimination and labor union bans. Given the nation’s history of slavery and financial apartheid, it is no surprise that economic transformations—such as the adoption of automation—exacerbate past wrongs and deepen income inequality.

According to the Wall Street Journal, the current rate of Black participation in the labor force is as high as it has been since the middle of the 20th century. While this seems like good news, it rings hollow when we reflect on the continued racial gaps in income and wealth. These disparities are driven by the dramatic differences in the employment experiences of Black workers. Recent research by McKinsey explains how automation in the economy could replicate past patterns and disproportionately expel Black workers from the labor market.

The findings indicate that Black Americans are overrepresented in low-wage, service jobs with little or no room for growth. These jobs are more likely to be automated—reducing or eliminating the need for human workers—and could hit Black workers the hardest, as in the past. Compounding the matter, Black workers are underrepresented in job categories most likely to grow, offer higher wages, and be performed by people.

How can philanthropy intervene? Of course, breaking this pattern will require the combined efforts of nonprofits, the public sector, the private sector, and philanthropy. However, here are five ways philanthropy itself can act to help ensure a fairer economic future, centering the need to level the playing field for Black workers:

1. Use all foundation assets.

Funding organizations that support and advocate for Black workers are an important resource, but a limited tool. A range of additional tools is available to creatively deploy philanthropic capital. For example, direct investments in local small business development can help spark and sustain vibrant communities while opening more job opportunities. Investing in entrepreneurs of color, who often are more likely to hire Black workers, can also create pathways to jobs and opportunity for Black workers. Low- or no-interest debt—to seed, sustain, or help scale local businesses that hire Black and other workers of color—is another deliberate approach to expand opportunity. The philanthropic sector could follow the example of many corporations and government agencies that set annual procurement (spend) targets with businesses owned by entrepreneurs of color and women. Foundations can also institute labor standards for its vendors to ensure the firms with which they conduct business treat their workers fairly on matters such as pay equity, paid sick leave, and livable wages.

We can also partner with neighborhoods to build community wealth and erase the racial wealth gap. Our organizations have the latitude afforded by patient capital to invest in the promise of economic models that broaden opportunity for all. Leading organizations such as Common Future, Center for Economic Democracy, Boston Ujima Project, and the Runway Project offer adaptable approaches that demonstrate how flexible and viable funding might make hyper-local economies work for all.

Enterprises that empower workers as decision-makers in their companies help to close income disparities, retain jobs in local communities, and reinforce democratic values. Employee stock option plans are the most common form of worker ownership in the US. A comparative study of the impact of economic well-being among young workers found that those with employee ownership had higher net household wealth, longer tenures on the job, and higher median incomes. Philanthropy can help raise awareness about the significant impact of worker ownership on economic security among business owners, particularly those operating in proximity to communities of color. Foundations could invest resources to incentivize conversion of privately held companies to worker ownership. Flexible philanthropic funds could also be used to help train and prepare workers for shifting to a worker-owned structure.

Finance initiatives that create pipelines into growth industries where Black and other people of color are underrepresented. Not only is it common sense, research shows that aligning funding in skill training with growth sectors yields better results for workers, including sustained work effort, employment with better benefits, and higher earnings. Philanthropic support for employer training partnerships targeted for these industries would make an important contribution to levelling access for Black and other workers of color. To leverage employer demand, these partnerships would need to be rooted in the realities of local and regional economies and prioritize the needs of workers of color along with industry.

Additionally, support for career-mentoring models—including apprenticeships—that help workers of color orient to and successfully navigate industries that lack diversity, could add value to the work experience of workers of color. Our foundation support for campaigns that advance worker rights and shield workers from capricious employer practices are another important area of need. Also, nonprofit partners can serve as intermediaries that help mitigate social barriers such as implicit bias and sector discrimination. Empowered workers can serve as an effective bulwark against biased decisions in hiring, promotions, pay equity, and employment dismissals.

Substantially increasing the management of foundation wealth by asset managers of color is another potential path to expanding economic opportunity in Black and other communities of color. The federal Small Business Administration reports that racially diverse investment companies tend to invest more in firms owned and led by people of color. Yet, according to the US Government Accountability Office (GAO), investment firms owned by people of color and women encounter significant obstacles competing for the business of institutional investors like foundations. In fact, the GAO finds less than one percent of the $70 trillion in US assets under management is directed by firms owned by asset managers of color and women.

Foundations are incrementally making progress but, as the data cited here indicate, there is a need to accelerate the pace of change. To significantly move the needle on the opportunity to hire more racially diverse asset management firms, staunch leadership is needed from foundation executives and boards, especially board finance committees (where applicable). Vocal leadership is important and defining performance metrics makes asset manager diversity tangible and measurable for boards and staff alike.

To level the playing field for firms led by people of color and women, foundations could learn from and adapt their own goals to the approaches of peer funders. The Association of Black Foundation Executives and Mission Investors Exchange are actively tracking foundation progress on this matter. A number of foundations have taken steps to establish relationships, build trust, and open opportunities to work with firms led and owned by women and people of color.

Finally, it is important for foundations to share what they are learning from their efforts to diversify asset managers. Many foundations have publicly shared lessons learned, resources and tools from their internal diversity, equity and inclusion work, which have been helpful to peers. Similarly, the field stands to benefit from knowing the promise, progress, and pitfalls of institutionalizing a commitment to hiring diverse asset managers.

For some time now, the nation’s workforce training system has failed to meet the needs of Black and other workers of color. Generations of workforce development policy has ignored the impact of racial bias—implicit and explicit—in American labor markets, failed to track racially disparate labor market experiences, and fallen short of retraining workers displaced from the labor market, especially Black and other workers of color.

The current federal job training law—the Workforce Investment and Opportunity Act— continues in this tradition and lacks the sort of innovation that could help Black and other workers of color navigate employment in today’s economy.

Investment is needed in building the technical skills and credentials of workers of color for growth industries and occupations. Foundations that support workforce development strategies can use their more flexible funding to:

Technological advances like automation have eased life for many of us. Yet those advances have come at great cost to many Black workers who have been systematically locked out of economic opportunity. As we weather this current pandemic-fueled financial storm, we need to focus our efforts on bolstering those in low-wage jobs who were already living on the margins before the crisis hit. There has never been a more urgent time to test revolutionary ideas that open access to good jobs, livable wages, opportunities to build wealth, and a sustainable future for everyone.

And I encourage readers to respond: How do you think philanthropy can help expand economic opportunities for people of color? Let us know in the comments below.

Loren Harris is Executive Director of National Impact for the Ballmer Group. Prior to that, he served as Chief Program and Strategy Officer for the Kenneth Rainin Foundation. 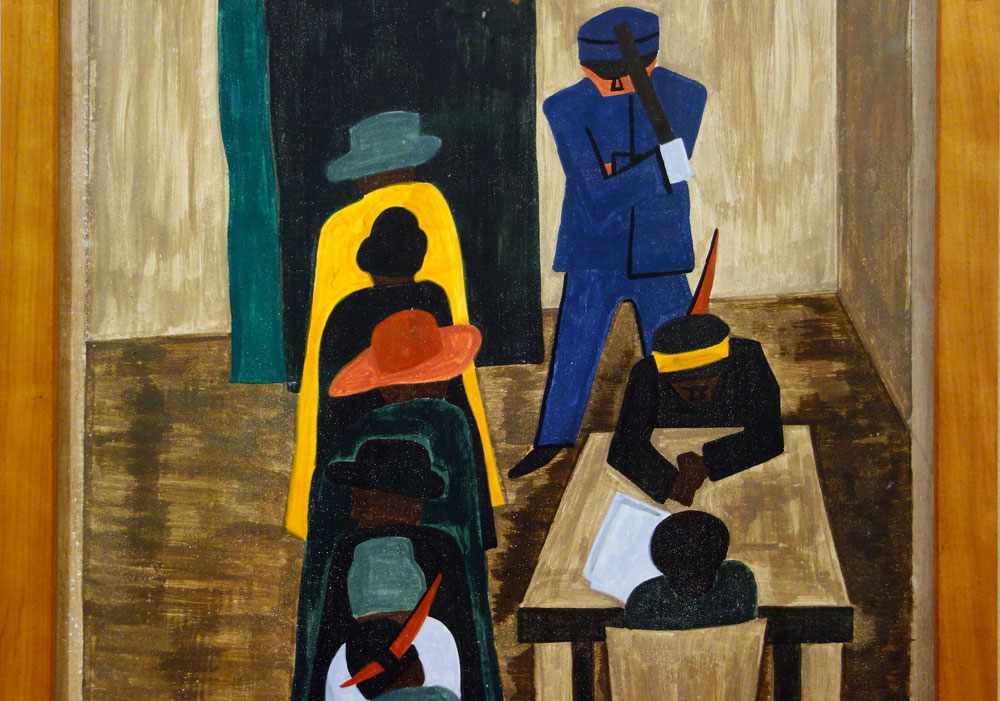 10 Steps Nonprofits Can Take to Make Space for Black Male...