How the Kellogg Foundation Takes On Structural Racism 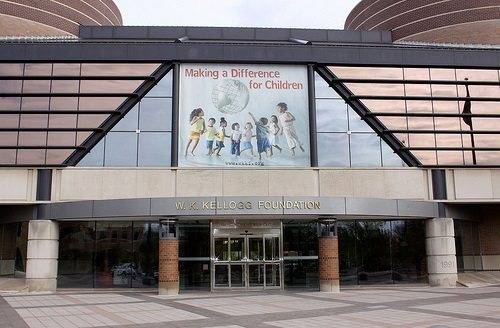 Like many, Buster was precise and well-researched in his listing of “the legacy of structural racism and contemporary colorblind practices that result…in disproportionate numbers of children of color, particularly boys, being unprepared to effectively contribute to society.” The statistics on African-American lifespans, school suspensions, proficiency in English and math testing, and dropout rates that Buster cited have been widely discussed in the nonprofit and even mainstream media, but the challenge is what to do, either though President Obama’s initiative or otherwise, to counter and remedy these conditions.

Buster identified several systematic barriers that are “rooted in historic patterns of racial bias, segregation, and poverty” such as “stop-and-frisk policies and street sweeps by police…media portrays that too often stereotype and criminalize, and overexposure to weapons, illegal drugs and alcohol.” He called these and other issues “deeply embedded in America’s education, juvenile justice, foster care, criminal justice and healthcare systems.” The foundation’s program for young males of color, according to Buster, is “racial healing and eliminat[ing] barriers to opportunity for young males of color.”

Mississippi is one of four “priority places” where the Kellogg Foundation is pursuing its strategy. From the interview, the strategy appears in practical terms to be supporting community groups that are “building a comprehensive network of support from birth into adulthood for our young men and boys….partnering with the network of grantees to advance, connect and share on-the-ground solutions and create brighter futures for Mississippi’s children.” As a foundation with a historic mission of helping “vulnerable children and their families,” an example of Kellogg’s grants cited by Buster as part of its racial healing in Mississippi is Call Me MISTER—which stands for “Mentors Instructing Students Toward Effective Role Models”—housed at Jackson State University. The program, Buster said, “is a perfect example of an innovative and effective leadership development program for African American males…[that] reaches out to college-aged young men, preparing them to invest in younger children by becoming role models and teachers in elementary schools.”

Kellogg has a much larger list of grantmaking in Mississippi and elsewhere addressing issues of young African-American men, but Buster’s choice of Call Me MISTER to highlight is like many of the grants listed in the BMAfunders.org database that strongly emphasize mentoring. The harder programs for foundations are those that take on the specific policies and practices of the systems Buster identified that maintain and deepen the racial inequities that are so evident in the socio-economic conditions of African-American males in our society. Buster added, “Just as we know that no single grant or program can create the systemic changes we seek in the state and the nation, we also know that changing conditions means addressing and changing public policies that keep inequities in place.” Although he mentions that the foundation also supports work on community and civic engagement and programs that address “flaws in the criminal justice system,” it always seems for many foundations that the programmatic responses to structural racism are more elusive than compensatory services. It tends to lead to an emphasis on mentoring and self-help oriented programs which are concrete and, if Buster is speaking from actual data, as he indicates with Call Me MISTER, has led to “the quality of education in low-performing elementary schools go[ing] up.”

It is a very revealing interview, showing the virtual tug-of-war that foundations face in their grantmaking responses to what they perceive as issues of structural racism. On one hand, in Buster’s words, foundations like Kellogg “want these [structural] barriers to become a thing of the past.” On the other, the foundation’s $3.8 million grantmaking effort launched last year in Mississippi is focused on “promoting new and effective strategies to achieve racial equity for boys of color and build a connected network of organizations increasing the academic, social, and leadership capacity of young men of color.” They aren’t mutually exclusive strategies at all, but it does seem that it is easier to find and fund the mentoring and leadership development programs which, in many cases, are hardly new, than to pinpoint what how to effectuate changes in institutional and public policies that sustain these structural inequities.

No one doubts the sincerity of Kellogg’s racial healing agenda nor the obvious commitment and expertise of the likes of Kellogg executives such as William Buster. But as one significantly Kellogg-funded grantee in Mississippi said to us last year (asking for anonymity so as to avoid jeopardizing future Kellogg grants), “No one is threatened in Mississippi by Kellogg’s grantmaking…it’s not getting up to the powers that be that can influence and change things.” That may have been the case before the confluence of Kellogg’s racial healing grantmaking and the president’s My Brother’s Keeper Initiative. Whether in this new environment foundations concerned about structural grantmaking evolve into strategies that show as much effectiveness in removing barriers as they do about helping individuals overcome them remains to be seen.—Rick Cohen