How to Bring Young Crowds back to Classical Music? Play the Local Parking Garage 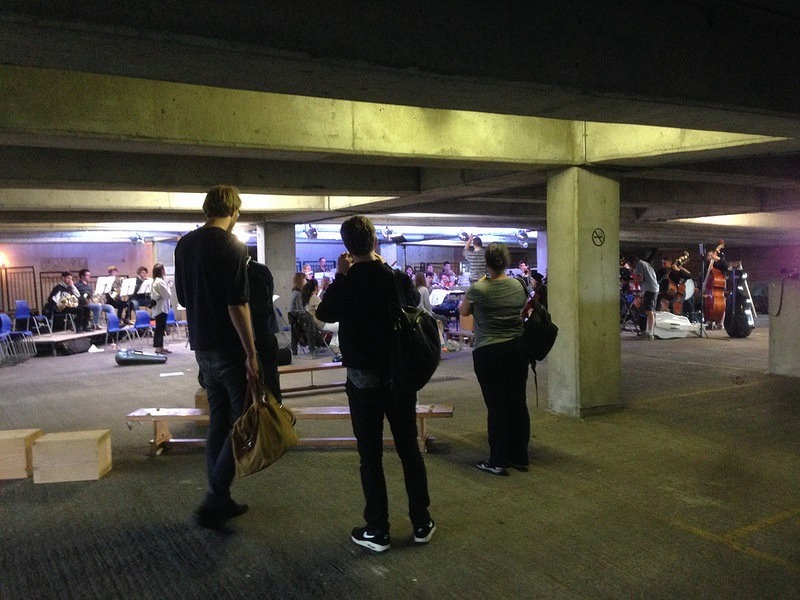 On the upper levels of a parking structure in Peckham Rye, a “gritty area of South London,” you can now hear the Multi-Story Orchestra, made up of freelancers and founded by the composer Kate Whitley and the conductor Christopher Stark. Whether playing Beethoven and Brahms or Louis Andriessen and Gérard Grisey, they attract young crowds of more than a thousand at a time. The tickets are cheap, and audience members can bring their own bottles or make use of the bar on site.

Whitley, who is 26, says her experience with concerts was unsatisfying:

“It really seemed like as soon as people came into a concert hall atmosphere, they became so reverential, in a sort of neutral way. It struck me as totally unnatural. I tried to bridge that gap, and find ways of presenting classical music that would be more fun to play, and be more fun to go to.”

“I was looking for some really big spaces, and a friend of mine suggested trying car parks,” she said. “There are no associations with art, or anything. It’s just a car park, and it’s just used to park cars.”

The venue of course has some acoustical issues, what with the screeching sounds of local trains and periodic bad weather. But instead of focusing on the problems, the organizers have embraced the character of the venue. Conductor Stark says, “We set out thinking that there would be quite a big restriction on what we would play,” and they went powerful, with a hundred instrumentalists playing Stravinsky’s Rite of Spring.

“But actually we felt that we were able to play things with a lot more subtlety,” Mr. Stark continued. “Quiet music actually works really well. We’re finding that we can tackle core repertoire, and it does work.”

David Allen, writing for the New York Times, asserts that there is a way in which the venue makes the experience inclusive: “Part of the attraction is that you, in the audience, stand in for the walls of the hall, helping to build a cocoon around the players. You’re aware that you’re absorbing the sound, playing your own small part in the performance.”—Ruth McCambridge