Humanitarian Crisis Deepens in Gaza Due to Warfare 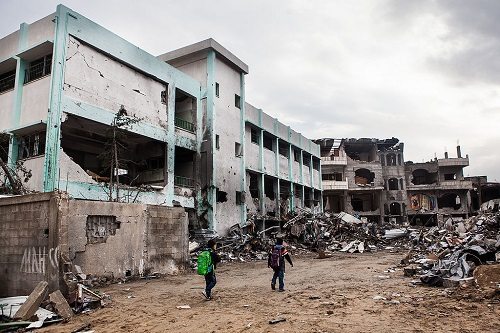 It must be difficult and scary to be an Israeli, having to run for air raid shelters as a defense against the small number of Hamas rockets that get through Israel’s “Iron Dome” missile defense. As of Friday, 123 Israelis had been treated for injuries—80 of them for shock and anxiety—as a result of the Hamas missiles, but no one had been killed.

At the same time, there had been more than 100 Palestinian casualties due to the bombing of sites in Gaza by the Israel Defense Force. Late on Saturday, the death toll in Gaza due to the recent hostilities had reached 160, including 23 on Saturday alone, plus 1,100 people injured. While the Hamas rockets are simply instruments of terror without much military impact, the Israeli response is quite effective: Witness this compelling video of a building in Gaza as it receives a “knock on the roof” from an empty Israeli mortar shell, followed by a devastating bombing 57 seconds later—and Palestinians in Gaza generally don’t have bomb shelters to use.

For the moment, we don’t need to explore the pros and cons of the counterproductive Hamas missile strategy, the uselessness of the Palestinian Authority under Abbas, or the “collective responsibility” character of the Israeli military response that is taking a huge toll on Palestinian civilians in the densely populated Gaza. Our issue in this newswire is how assistance is supposed to get in, given that the crossings in and out of Gaza to Israel have been generally closed even before the latest warfare started, and the crossing into Egypt at Rafah opened only recently so that Egyptian ambulances could take out some of the wounded.

Charities associated with the wealthy Gulf emirates have begun to funnel money into Gaza. The Qatar Charity announced it is providing QR20 million for Gaza relief and reconstruction. The head of the Emirates Red Crescent showed up in Gaza to monitor whether relief convoys were reaching the embattled area. Despite having closed the Rafah crossing again, the Egyptian Army reports that it has ordered 500 tons of food and medical supplies back into Gaza.

Malaysia and other countries are sending doctors, but the Egyptian pledge is noteworthy: Gaza needs supplies, particularly medical supplies. According to Doctors Without Borders, the problems of emergency treatment at hospitals will be worse because of the shortage of medical supplies that existed prior to the warfare.

We’ve written in the past about the difficulty of getting humanitarian aid into Syria where the Assad government frequently refuses to guarantee secure corridors for aid workers to get to rebel territory. In Iraq, the collapse of the government and the passivity of many government and military leaders have led to an ongoing and worsening humanitarian crisis. For all the difficulties of getting aid into war-torn areas like Iraq and Syria, where rebels are fighting against less than fully functional military authorities, the Gaza situation is different. Gaza is facing off against a very powerful military able to use jets, helicopters, and drones with deadly efficiency, albeit with much collateral damage in the form of civilians injured or killed. Every possible access point for aid to get to civilians in Gaza is just about closed.

It is difficult to fathom how aid—in the form of supplies—will get to Gazan Palestinians, how much of it will get through, and how much aid is simply not going to reach people whose lives are caught in a conflict without an easy and obvious end.—Rick Cohen