Hurricanes and Wildfires Ravage the Country—Both Fueled by Climate Change

Media coverage continues to rage about the aftereffects of Hurricane Harvey, and now news is breaking about Hurricane Irma and the 10th tropical storm of the season, Jose, predicted to evolve into a hurricane of its own. But what is not generating as much discussion are other harmful weather-related events, such as wildfires, and the “invisible hand” behind them all: climate change.

The National Hurricane Center is calling Category 5 Irma “potentially catastrophic.” Florida is preparing for a possible hit, and both the U.S. Virgin Islands and Puerto Rico could be pummeled by the duo of Irma and Jose. Meanwhile, wildfires are ravaging the West and Northwest. A 2016 Climate Central analysis found that the annual number of large fires has tripled since the 1970s and that the amount of land they burn is six times higher than it was four decades ago. According to the organization, more than 37,000 fires have burned more than 5.2 million acres across the country since the beginning of the year.

Fires have burned nearly 600 square miles in Montana—an area larger than Wyoming’s Grand Teton National Park. It’s costing the state an estimated $1.5 million a day to fight fires. “What had been predicted to be a moderate fire season earlier this year has turned into one of the state’s most active ones, as severe drought spreads across the state,” reports the Bozeman Daily Chronicle.

Washington, California, and Oregon also issued distress calls over the last several days. Wildfires forced thousands to flee their homes across the area during the smoke-shrouded holiday weekend. The fires caused evacuations in Glacier National Park in Montana and many other parts of the West and forced about 140 hikers to spend the night in the woods after fire broke out along the Columbia River Gorge Trail in Oregon. In Los Angeles, firefighters spent the weekend fighting what Mayor Eric Garcetti called “the largest fire in the history” of the city, covering about 7,000 acres and forcing hundreds of residents to evacuate. Officials are worried about the impact of the heavy smoke on human health, both physical and mental.

What do tropical storms, hurricanes, and wildfires have in common? All of them are correlated with climate change. EPA head Scott Pruitt continues to insist that talk of any association is “misplaced,” and though it’s true no single event can definitely establish causation, the majority of experts agree the cumulative evidence is clear and points to escalating destabilization.

The association of stronger hurricanes to climate change is well publicized. In a warmer world, there’s more water vapor that storms can sweep up and dump on us. In addition, as the earth’s temperature warms, land-based ice melts and ocean water expands, causing sea levels to rise. This, in turn, increases the risk of flooding. If the sea level continues rising at the current rate, says Chris Landsea, science and operations officer at the National Hurricane Center, every single hurricane will have a two-foot higher storm surge by the end of the century.

However, the contribution of climate change to wildfires is less well understood. Rising temperatures are extending the fire season longer than it used to be, and the warming fueled by greenhouse gases is stoking more and larger fires as it dries out more vegetation that acts as fuel.

“A single stray cigarette is often enough, particularly with the hot, dry brush found along state and federal highways,” a recent article in Forbes magazine warned. It reported that the biggest culprit for starting wildfires may be cars, as a hot undercarriage or tailpipe can ignite brush found at campsites or on the sides of roads.

“The records being broken year after year—whether for drought, storm surges, wildfires or just heat—are happening because the planet is markedly warmer than it has been since record-keeping began,” charges author Naomi Klein in the Intercept. “Ignoring those facts, [and] failing to provide a platform to climate scientists who can make them plain, all while never mentioning President Donald Trump’s decision to withdraw from the Paris climate accords, fails in the most basic duty of journalism: to provide important facts and relevant context.”—Pam Bailey 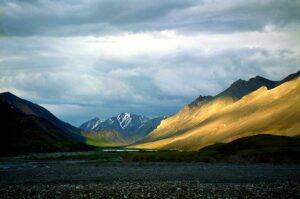 Out of View, Exiting Administration Wields Its Axe at the Environment