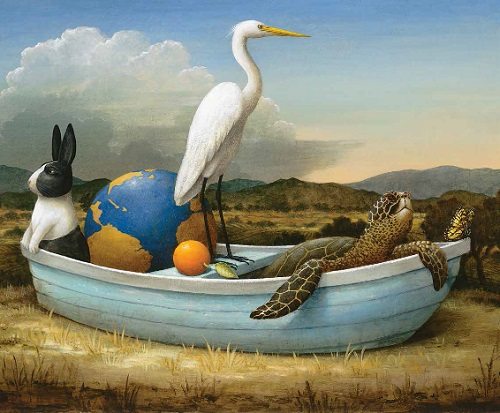 “The Ark” by Kevin Sloan/www.kevinsloan.com

In this edition of the Nonprofit Quarterly we are taking on the topic of organizational hybridity. For many, that will immediately and narrowly translate to L3Cs and benefit corporations; but although we do take a critical look at those possibly overly heralded “boutique” sectoral hybrids, they are not our focus. Rather, we wanted to explore and parse the distinctions between what the sector is calling hybrids (entities) and hybridity (concept). And, we wanted to flag some issues that we think are important for the sector and its funders to consider.

First, the Times Call for Redesigns

The times are exciting in that they are calling for new forms, more porous boundaries, different types of relationships, and a different way in general of getting things done (and even of determining what needs to get done). Informing visionary hybridity is the powerful meeting point of technological advances and social longing. It is not time to fix on any particular new vehicles but, rather, to experiment.

The promoters of the boutique hybrids make strong distinctiveness claims that have given them a “halo effect” in some circles. They assert that the new form being promoted is completely different and better than what might otherwise be constructed, and that the resulting organization will be savvier and more current. This is, as far as we can determine, untrue; rather, claiming one of the new forms seems to have become a competitive positioning move vis-à-vis funders—a code of sorts that somehow sets them apart (for instance, as better investments than regular nonprofits). NPQ believes that any actual substantive distinction in many of the sectoral hybrids has more to do with issues of ownership, accountability, and distribution of resources than anything else (business acumen or excellence or scalability)—and those distinctions may not be positive.

These new nonprofit-business hybrids are not the only formal hybrids we have been dealing with, of course. Quasi-autonomous nongovernmental organizations (quangos), government-sponsored enterprises (GSEs), congressionally charted nonprofits, and, in a more informal way, organizations that are fully contracted to government have been in our midst for half a century. But hybridity as discussed in this issue has to do with the marrying of diverse institutional logics in one organization; and, if we look at it that way, there are informal hybrids of every kind all through the nonprofit sector, as there have been historically. Nonprofits that engage in some kind of business enterprise, even as core to their central activity, are as common as pebbles on a beach: there are child care centers that charge families who can afford it; the Met sells tickets; and nonprofit hospitals sell care and rent rooms. They meld donative logics with business logic. Some nonprofits manage legal and other tensions related to this through establishing associated organizations, but many do not.

In short, we need not change form or tax status, nor make up new categories of organizations, to achieve hybridity; the potential for enormous flexibility is already written into nonprofits.

Additionally, hybridity does not have to be achieved in an individual organization. Like scale, hybridity can be neatly achieved through networks; and, in fact, this may better guard the nonprofit’s organizing principle as functioning first in the best interests of constituents. And the truth is that hybridity through networks is historically present in every community, since communities are by nature hybrid spaces. In some ways, you could look at sectoral distinctions like the three branches of government: they are different by design and to good stead.

What we were left with after researching this issue was the sense that much of what is being branded as new nonprofit/for-profit sectoral hybridization is pure hype, add-ons, and unnecessary distractions. We have not been able to make logical sense of the arguments for these hybrids. The only clearly stated reason for nonprofit/ for-profit hybrids is that somehow the profit motive will lend some motivation or drive innate innovative capacity within the social enterprise environment—and the facts simply do not support this. The idea that an organization must be a for-profit if it is to achieve scale or to be well run and financially sustainable over time is nonsense, as is the idea that every for-profit will exploit anyone in sight for cash. Neither sectoral home is a decider of destiny, but it does guide decision making in ways that are clear beacons to behavior.

There are many nonprofit organizations functioning as hybrids of some kind out there now—from Thrivent Financial to MoveOn.org to ProPublica. Each is made up of an integrated mix of professional logics but in pursuit of one primary mission goal. All must know their enterprise model and operating environment to a T. All must measure things like the transaction costs of revenue streams and the dollar/mission value of constituent engagement. What makes any of the new entities that declare themselves so loudly as the new wave more hybrid than these innovators? And, when one notes—as Rick Cohen outlines in his article on L3Cs and Rae André discusses in her piece on quangos—that these self-proclaimed hybrid structures provide less accountability than the aforementioned in terms of reporting mechanisms and governance, one is forced to take a closer look at the stated rationales for hybrids.

So, are we being sold a bill of goods? If we were to take James Collins and Jerry Porras’s idea about greatness being in the ability to discern what is sacred and what is not, then creating a confusion of an organizing principle (like whether mission or profit is the goal) at the center of an organization sounds unwise and counterproductive.1NPQ would argue that the choice of sector is a statement of values that binds an organization to shared governance, public accountability, nondistribution, and the commitment to work to public benefit.

Sectors: The Distinction with a Difference

An institution’s sector, which guides its institutional priorities and accountability streams, appears often to be important when you look at outcomes. There are some fields in which you can see the comparative results of nonprofit versus for-profit—nursing homes, hospices, schools, and even aquariums—and there are many indicators pointing to outcomes being affected by the sector.

For instance, NPQ has done a number of articles on the growing presence of for-profit corporations in the hospice care “industry,” and the effect their presence is having on cost and quality of care. One hospice organization, Vitas, started in Miami but now operates in eighteen states altogether. And it is owned by a larger corporation, Chemed, which also owns Roto-Rooter—the smaller of the two businesses. In 2011, the top executive at Chemed took home more than $6 million. In Palm Beach, according to a study done by the Palm Beach Post, Vitas keeps patients on government-reimbursed care for 40 percent longer than its nonprofit counterparts.2

And these numbers are not isolated. Over the same period of time that for-profit groups have been aggressively entering the field of hospice care, Medicare costs have increased precipitously. The Department of Health and Human Services says that Medicare spending on hospice care for nursing facility residents jumped nearly 70 percent between 2005 and 2009, from $2.55 billion to $4.31 billion.3

A number of investigations and suits have been launched around the country regarding for-profits’ flouting of eligibility requirements. Watchdogs charge that for-profit hospice providers locate more-profitable patients and serve them in greater abundance as part of their business model, and this can become a problem when the patient is actually ineligible—that is, not within six months of death. Some speculate that the for-profits are taking patients—including Alzheimer’s and dementia patients—too soon, possibly through sweetheart deals with nursing homes, resulting in longer-term care. These patients also generally cost less to treat, thus hiking up profits even further.

Nursing homes show similar disparities. A report released by federal healthcare inspectors in November 2012 revealed that there is approximately $1.5 billion in Medicaid overbilling by the nursing home industry.4 But Bloomberg Businessweek filed a Freedom of Information Act request and dug a little deeper, finding in their sample that for-profit nursing homes overcharged at a rate of 30 percent in comparison to nonprofits, which overcharged at a rate of 12 percent. The overcharging was through the filing of improper claims.5

The article states, “The figures add to the case—advanced by healthcare researchers and Medicare overseers in at least six governmen