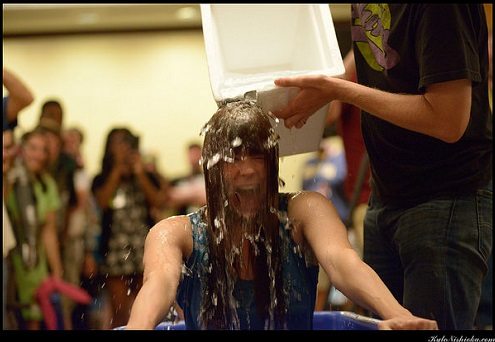 Here’s what has me shaking my head about the whole ice bucket thing and the responses to it: The only difference between this and every other fundraiser ever invented is that this one happened to go viral, the result of technology that is relatively new. That’s it—that’s the whole difference.

Every fundraiser ever invented is meant to part money from donor. The fundraisers can be fun or challenging or serious, dressy or casual, long or short. Not everyone will respond to them; some will respond to all of them. Organizations can care very much about educating the donor, and they may or may not do that in the end, but that’s relevant only if the donor doesn’t donate. Since no organization goes back to check the level of the donor’s increased knowledge, no one knows anyway. But the assumption is that if they didn’t give, the organization must have failed to educate enough.

Since the dawn of donating (and I was there), donors have either cared about learning or they didn’t. Many donors give for reasons having little or nothing at all to do with the organization or its cause. They may give again, though most fundraisers know that most won’t. Cultivating and tending a donor base takes many years, and even the most loyal of donors represent only a fraction of the total annual givers. That’s why there are annual fundraisers: to find new people to donate to the cause, since the loyal givers are already giving, mostly. And the hope is that the loyal donors are bringing their friends to the fun, casual, dressy, long, short, educational, testimonial-laden or testimonial-free event. And the new ones will attend for their friends, or for the cause, or because they’ve always wanted to see the place where the event will be held.

The main point is that absolutely nothing about the Ice Bucket Challenge is new or different except the fact that the technology exists now to allow distribution via a global network should the members of the network find the thing sufficiently interesting to forward. If they don’t, the content (in this case, the Challenge) goes nowhere. And that’s exactly like trying to predict if people will come to your fundraiser depending on the weather—if it’s sunny, people won’t come because they want to be out in the sun; if it’s raining, people won’t come because they don’t want to get wet and uncomfortable. On the other hand, the sun might make them feel happy and supportive, or the rain might make them feel bored and supportive.

No one can predict this, and crowdfunding needs a lot more time to mature to be better understood. Crowdfunding is already an important way of raising money in both the nonprofit and the for-profit sectors, and people will become better at using it as part their broader efforts, just as the Internet itself was incorporated into all of our work after much fanfare and consternation and praise and gnashing of teeth.

Anyway, the “challenge” here isn’t to the donors, it’s to the people at ALS who are, at present, trying to figure out what the hell to do now. It’s the same kind of happy panic created in the olden days when someone would suddenly bequest $100 million to a kitty cat, or terraforming on Jupiter, or poetry (of all things). In the meantime, more than a few ice bucket-type events will happen. Give if you want to, play if you want to, dress up if you want to, run or walk or bike if you want to, listen attentively if you want to…and don’t if you don’t. Just like you do now.

Paul T. Hogan is the executive vice president of the John R. Oishei Foundation and a poet (of all things).