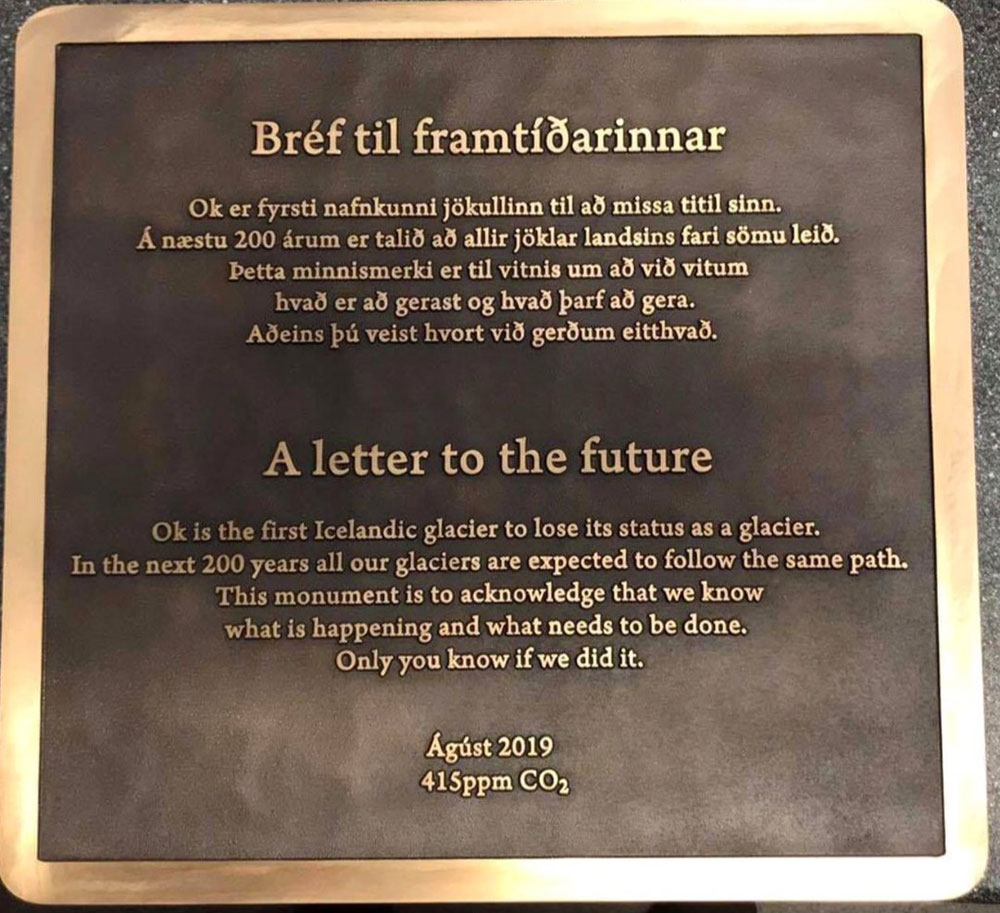 We are grieving for our relationship with the earth.

This weekend, scientists gathered together with the Icelandic Hiking Society and the general public in Borgarfjörður, Iceland. They came to heed Shakespeare’s demand to “give sorrow words” and install a plaque to memorialize the first glacier lost to anthropogenic climate change.

There might still be some ice left in the area, but glaciers are defined by movement. Heavy snow compacts the bottom layers of a glacial plane into ice, which then then slides downhill due to its weight. Ok, thinned out by ice melt, no longer has enough mass to move.

Scientists from Rice University produced a documentary about Okjökull in 2018, called Not Ok. Anthropologist Cymene Howe said, “With this memorial, we want to underscore that it is up to us, the living, to collectively respond to the rapid loss of glaciers and the ongoing impacts of climate change. For Ok glacier it is already too late; it is now what scientists call ‘dead ice.’”

The plaque on Ok reads:

A letter to the future

Ok is the first Icelandic glacier to lose its status as a glacier. In the next 200 years all our glaciers are expected to follow the same path. This monument is to acknowledge that we know what is happening and what needs to be done. Only you will know if we did it.

The line about “415 ppm CO2” is a reference to current atmospheric carbon levels, which are the highest they’ve been for millennia. The words were crafted by Icelandic poet Andri Snær Magnason.

Howe told WBUR’s Peter O’Dowd, “We decided to do a memorial very specifically because if we look around the world, we can see that memorials everywhere stand for either human accomplishments, like the deeds of historic figures, or the losses and deaths that we recognize as important, like on a battlefield memorial…I think of the last line, ‘Only you know if we did it,’ as a kind of call to action.”

The climate crisis is creeping more and more into public conversation, thanks to the tireless work of climate justice activists. The same week the plaque was placed in Borgarfjörður, activist Greta Thunberg set sail on a zero-emissions yacht and teams of researchers found microplastics in the Alps, the Rockies, and the remote Arctic.

Some activist groups like Extinction Rebellion are treating the climate crisis like the emergency it actually is; some philanthropists, such as Alison Getty, recognize this and are empowering them with funds. But mostly, the people who pull the big levers of human climate impact—that would be governments, oil and gas companies, and large goods producers—seem to prefer the status quo. If it keeps going this way, we’ll have more plaques than glaciers, and what a sad fate that would be.—Erin Rubin