If You’ll Go Vegan in Detroit, PETA Might Pay Your Water Bill 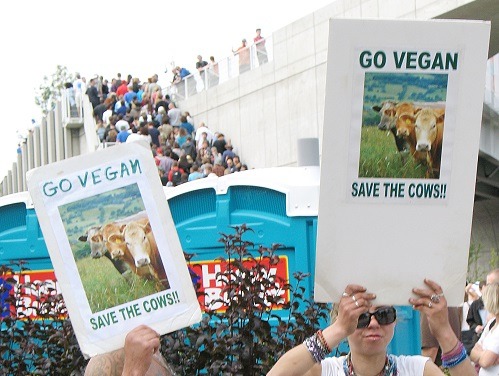 The recent offer by People for the Ethical Treatment of Animals (PETA) purportedly to help water customers in Detroit may be the rock bottom of disrespect for poor people. PETA has offered to pay the water bills of 10 families in Detroit in return for their adopting a vegan lifestyle for one month.

Offensive? It is hard to imagine what would make one’s blood boil more than the elitism and arrogance of PETA, knowing that there are many more than 10 families among the 80,000 or more with water bill delinquencies that might be desperate and vulnerable enough to make them accept the PETA deal.

According to IBT, PETA spokesperson Linday Rajt said that the idea and the money came from a Detroit-area PETA member who declined to be named. In addition to money for the delinquent water bills, PETA is offering these desperate families a “basket of vegan foods” and recipes to help them along in their adoption of the vegan lifestyle.

As IBT notes, PETA has used plenty of in-your-face campaigns in the past that have alienated multiple constituencies, noting its “Got Autism” campaign that linked autism with dairy products. In most of those other campaigns, PETA attracted opposition from groups that told off the organization in no uncertain terms, but in this case of Detroit’s water customers, PETA is preying on poor people people in desperate circumstances.

An ostensibly non-abusive charitable effort to help low-income Detroiters pay their delinquent water bills and avoid shutoffs is the Detroit Water Project, an online platform created by two Twitter users. The latest information posted by the Detroit Water Project suggests that the site has attracted over 4,000 donors who will pay specific water customers’ bills directly, as opposed to making contributions to a 501(c)(3) charity that would gather the money and make the payments. According to the project’s website, accessed on July 27th, the program works as follows:

“You mention in the privacy section that Detroit Water might identify residents. How likely is this, how would it happen, has it happened?

What kind of permission did you need to get from Detroit Water Authority to use this info? How did you get the info?

Are residents opting in or opting out of this? Who is deciding and how are they deciding who’s bills get paid?

Where is transaction data being stored? How secure is it?

Is CFA [Code for America] involved in this (one of the founders has a CFA email address)? Did you create this totally on your own? Others who helped? How long did it take?”

Interestingly, Code for America describes itself as a 501(c)(3) “that helps residents and governments harness and technology to solve community problems” in part by “encourag[ing] and empower[ing] residents to take an active role in their community,” but the two Twitter users who created the Detroit Water Board are not Detroiters. (The Washington Post identifies Tiffany Bell as in Oakland, California, and Kristy Tillman in Boston.) The government role in this situation seems to be the willingness of the Detroit Water and Sewerage Department to provide account information on residential customers—at a minimum, account information without customers’ names, but potentially their names as well, both disclosures potentially in violation of the water customers’ privacy rights. Hopefully, Bell and Tillman will answer Bernholz’s legitimate questions.

Our concerns about the Detroit Water Project resemble the issues surrounding the PETA strategy: Poor people facing the loss of running water are vulnerable to ploys that might sound helpful but end up sacrificing some of their rights. With the Detroit Water Project, an Internet platform is somehow able to get account information from a public agency without the approval of the customers themselves, simply because the agency decides to do so. In a way, PETA’s disrespect for the water customers, trading running water for a month-long commitment to veganism, is comparable to the disrespect accorded by the Water Department itself to these vulnerable Detroiters.

While we wait to hear what Lucy Bernholz has learned, we have a recommendation to the Detroit residential water customers who might be interested in taking advantage of the PETA offer. A PETA spokesperson says the organization will rely on the “honor system” and not police customers’ pledges to go vegan. Remember that Detroit is a city of 700,000 often described as a “food desert,” where Whole Foods last year was the first national supermarket chain to open a store in the city in more than a decade, making, we would guess, the ability of many Detroiters to follow a vegan lifestyle somewhat challenging. Our suggestion for Detroit water customers? Say yes, take the PETA money, and don’t worry about the PETA pledge.—Rick Cohen