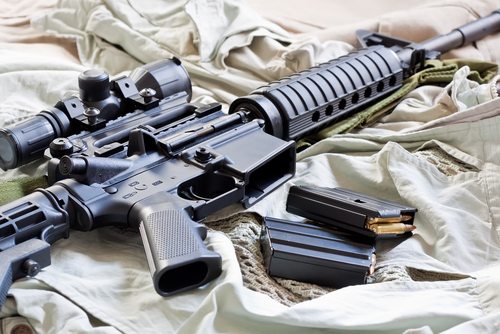 Earlier this year, Rep. Gabrielle Giffords, who was a victim of a 2011 mass shooting in Tucson, Ariz., and her husband, retired Navy Captain and astronaut Mark Kelly, launched Americans for Responsible Solutions. The goal of the 501(c)(4) nonprofit advocacy organization is to promote “commonsense solutions to protect our communities from gun violence.” According to its website, “as gun-owning Westerners with moderate, consensus oriented politics, Gabby and Mark believe in the need to both enact measures to reduce gun violence and protect the rights of responsible gun owners.” As such, their “common sense” solutions include requiring criminal background checks on all gun purchases, limiting high capacity ammunition magazines, limiting assault weapons, and stopping gun trafficking.

In an attempt to showcase how easy it is to purchase an assault weapon currently, Kelly recently purchased an AR-15 military-style gun, the kind of weapon that would be banned under a bill proposed by Sen. Dianne Feinstein (D-Calif.). Kelly noted that “the background check only takes a few minutes” and he called it “scary” to think about “people buying guns like these without a background check at a gun show or on the Internet.” On his Facebook page, Kelly stated that he plans to donate the AR-15 that he bought to the Tucson Police Department.

Anti-gun control advocates, most notably the National Rifle Association (NRA), have been quick to paint proponents of any gun control legislation as absolutists who want to take away an individual’s right to own firearms. As NPQ has previously noted, the NRA has strayed from its original mission of representing sport-oriented hunters and now largely caters to the interests of weapons manufacturers. Advocates like Giffords and Kelly bust the caricature of gun control proponents advanced by the NRA and others. Instead, they remind us that our gun policy choices are not limited to the polar extremes of adopting a widespread ban on all gun ownership or doing nothing at all to try to improve public safety. –Mike Keefe-Feldman