In Sandy’s Wake, Mermaid Parade Must Go On 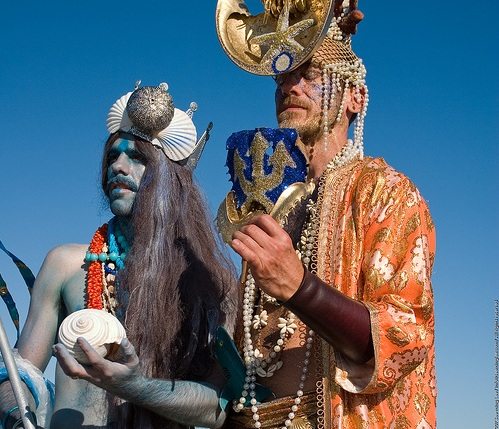 Each year, the nonprofit Coney Island USA puts on a Mermaid Parade. The parade, which was launched in 1983, is a “celebration of ancient mythology and honky-tonk rituals of the seaside [and] it showcases over 1,500 creative individuals from all over the five boroughs, opening the summer with incredible art, entrepreneurial spirit and community pride,” according to Coney Island USA’s website.

The nonprofit describes the parade as “an American version of the summer-solstice celebration” that “ takes pride of place with West African Water Festivals and Ancient Greek and Roman street theater;” this all comes together to create “an artistic framework on which artists can improvise, resulting in the flourishing of frivolity, dedication, pride, and personal vision that has become how New York celebrates summer.”

However, Superstorm Sandy was hard on buildings in or near Coney Island, and the Associated Press reports that, after racking up $400,000 in damage, the economics behind putting on this year’s Mermaid Parade might not add up for the nonprofit. Still, Coney Island USA Executive Artistic Director Dick D. Zigun tells the AP, “”We’re moving forward, even though it’s questionable.”

Given that Coney Island residents are dealing with dozens of buildings that will have to be demolished, a public library that is closed, and a post office that isn’t fully open, one might question whether concerns about the Mermaid Parade might have to wait in line. But attracting tourists with its carnival features and atmosphere is what Coney Island does, and the Mermaid Parade reportedly drew 750,000 spectators last year who purchased food, drinks, rides, and souvenirs.

In that sense, the nonprofit’s parade is a powerful economic driver, even if its goal is artistic, not commercial, in nature. The owner of Deno’s Famous Wonder Wheel Amusement Park in Coney Island, D.J. Vourderis, tells the AP, “We’re almost dead, but we’re open…We’ve build it; now we’re just waiting for them to come.” This year’s Mermaid Parade, which is followed by a Mermaid Parade Ball at night, is scheduled for June 22, 2013. –Mike Keefe-Feldman