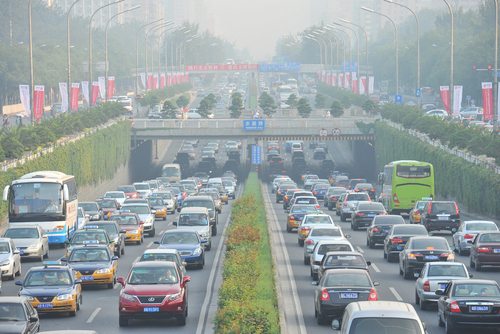 A number of scientists, futurists and environmental advocates have warned us about air quality. Speculative fiction writers have even posited a dystopian endgame where everyone has to wear oxygen tanks and air is available only at a price. Usually such grim scenarios take place in the distant future, but in China, air is now officially for sale.

The U.S. Environmental Protection Agency’s (EPA) Air Quality Index only goes up to 500, but on at least two occasions in January, the air quality measured at the American Embassy in Beijing went above that mark and off the charts. Air quality in the 300-500 range is considered “hazardous,” so going off the scale makes the air in Beijing the equivalent of whatever “beyond hazardous” means. Reporting for Fairfax Media in China, John Garnaut gets a pretty straightforward take on the implications from an interviewee who was wearing a facemask: “I think the air is not clean and pollution is serious. I do not feel well,” she said. You can see the smog that concerns her for yourself in this video from Fairfax Media:

Enter the air baron, Chen Guangbiao, who is selling cans of air at a price roughly equivalent to 80 cents each. He’s offering three varieties of air: Pristine Tibet, Post-Industrial Taiwan, and Revolutionary Yan’an. But Chen is not selling the air in hopes of making a profit. He’s doing it to make the point that if drastic action to improve air quality is not taken soon, many of China’s titans of industry will be “sacrificing their descendants.” Says Chen, “If we don’t start caring for the environment then after 20 or 30 years our children and grandchildren might be wearing gas masks and carry[ing] oxygen tanks.”

Even without such dire outcomes, the impacts of air pollution may be felt in other ways; for instance, the EPA recently reported that asthma rates among U.S. children rose from 8.7 percent in 2001 to 9.4 percent in 2010. If such a trend continues, it won’t be long before one in every 10 U.S. children has asthma. The thought of air for sale is almost too horrible to contemplate, but as Chen Guangbiao points out, each smog-producing day takes us one step further down this universally unwanted path. Political theater may spark discussion, but can air quality advocates and others convince industry and government leaders to help us avoid this tragedy of the commons? –Mike Keefe-Feldman