Incident at Kansas City Library Goes off the Rails

At the first lecture of a series entitled “Truman and Israel” at the Plaza branch of the Kansas City Public Library (KCPL) in Missouri, city police arrested both an attendee and the library’s director of programming and marketing. The alleged violation? Asking a question during the Q&A session following a talk by U.S. diplomat Dennis Ross.

The talk was cosponsored by the Jewish Community Foundation of Greater Kansas City and the Truman Library Institute, along with the KCPL. Activist Jeremy Rothe-Kushel of Lawrence, Kansas, was charged with trespassing and resisting arrest, and library employee Steven Woolfolk was charged with interfering with that arrest.

Woolfolk said the foundation came up with idea of getting security for the talk. According to Woolfolk, the library will do this from time to time at a speaker’s request, but in this case, the JCF arranged for private security guards as well as off-duty police officers to be present. This was, according to this article, in part because of lingering public sensitivities following the April 2014 shootings by a lone gunman at a Jewish community center in Overland Park, Kansas.

“We agreed to the additional security on two conditions,” Woolfolk said. “First, the guards were not to remove any audience member for asking an unpopular question. Second, if the library staff concluded that there was an imminent threat—such as a weapon drawn or people rushing the stage—the security team would consult with us before taking any action. They agreed to those conditions.”

Rothe-Kushel went to the mic to ask a question, with a preamble that asserted that the U.S. and Israel have engaged in state-sponsored terrorism. Ross disagreed, but answered the question anyway. When Rothe-Kushel attempted to persist in making his case, Woolfolk says, there was a “scattering of boos from the audience, but no calls to shut up.”

One of the private security guards then grabbed Rothe-Kushel. At that time, Woolfolk says, “I tried to intercede and deescalate the tension.”

After the question session, I thought the incident was over. The security guards had asked Rothe-Kushel to leave, he agreed, and I showed him how to go out the back way to the lobby. I needed to talk to my supervisor, Deputy Director of Public Affairs Carrie Coogan.

But as he left, Woolfolk also was grabbed—this time by an off-duty policeman. A second policeman arrived, kneed him in the leg, and handcuffed him. A number of people asked why the arrest was occurring, but each time, the officers said either “We don’t know” or “We can’t say.”

Coogan had both Woolfolk and Rothe-Kushel released on a signature bond. Even though the library has protested from the beginning that the arrests were a violation of the First Amendment, the court continues to hold periodic status hearings with the two. KCPL Executive Director R. Crosby Kemper says that the library decided to publicize the incident to the media because the city was still pursuing the case.

“The last appearance was in mid-September,” Woolfolk said, “at which the judge agreed to depose three witnesses for the library. The next hearing is November 16th.”—Ruth McCambridge

More about: museums and librariesMissouri 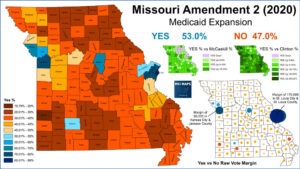 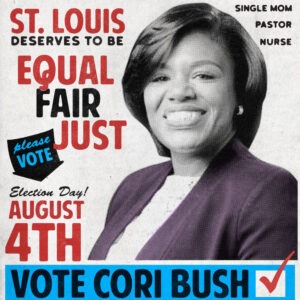 Does Cori Bush’s Win in Missouri Predict a Progressive Future?

Missouri Becomes Sixth State to Expand Medicaid at the...