The Incomplete Recovery Leaves Many Invisible and Suffering

We now have a better idea about why the economic recovery just doesn’t feel right. Two recently released reports from the Brookings Institution’s Hamilton Project shed more light on employment in the United States and the challenges we still face from a struggling economy. The good news is that the overall job market has now fully recovered from the huge loss of jobs experienced during the 2007-2008 Great Recession. But while the statistic recovery is now complete, the human impact is not; there are significant lingering challenges being faced by those left on the outside looking in.

From an overall national perspective, the employment picture is back to what it was pre-Recession. Adjusting for the overall growth of the population and the aging baby boom generation, “nearly a full decade after the start of the recession, employment has returned to its demographically adjusted pre-recession level. This does not mean that all harm to the labor market resulting from the Great Recession has dissipated, nor that the economy is at full employment. It does mean, though, that the economy has added enough jobs to make up for the losses during the Great Recession.” 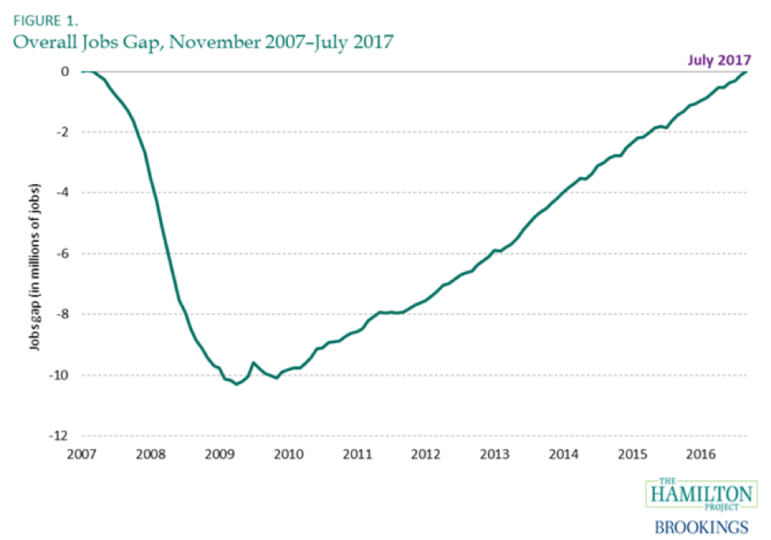 Reaching the yard marker of 2007-2008 is an important milestone. But compared to the three recessions that preceded the Great Recession (1981, 1990, and 2001), the hole left was much deeper and it took much longer to recover. While the nation as a whole is now back to normal, regionally there are significant differences.

States in the Northeast and Midwest have seen particularly strong job growth, adjusting for demographic change; for example, Massachusetts has closed its gap and added 1.1 percentage points. Some of the largest remaining gaps are observed in Western states, where Wyoming has the largest employment rate gap of -4.3 percentage points. Importantly, these differences may reflect differences in population growth and migration across the states.

Two current major political battlefields, education and health care, become even more important in light of what the Brookings studies found. Education does matter; “the less educated an adult is the more likely it is that they will not be in the work forces.” And good health (and healthcare) matters, too. Brookings found that “almost 30 percent of prime-age nonparticipants—roughly equally split between men and women—report being ill or disabled. With roughly 45 percent of prime-age male nonparticipants classified as disabled, health related barriers to being in the labor force may represent a significant challenge…and pain medication may prevent a significant number of men from working.”

Clearly, the work of economic repair has not been completed. For organizations, public and private, whose work it is to support those who cannot make it on their own, this picture of a recovery still in progress can help shape their agenda for the coming months and years. A better understanding of the barriers keeping people out of gainful employment can help tailor programs and policies to be more effective. Recognizing that education, health, and other societal issues outside the workplace are significant can help build support for strengthening these social systems. Seeing the regional and demographic obstacles can lead to a more focused look at how best to overcome the hurdles. Ignoring these clues will lead to more societal turmoil and dysfunction.—Martin Levine