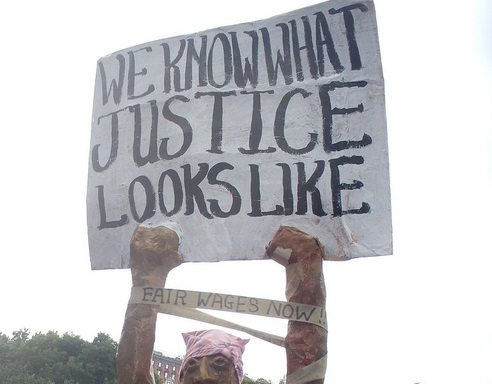 NPQ admits to being initially a little surprised by a statement from the Independent Sector board of governors asking for all nonprofits to pay a living wage. As readers know, there are organizations in the sector with something of a history of looking for exemptions from living wage requirements, and we could do with some leadership on the issue. But as we looked further into the statement, we found under that decisive headline a lot of caveat-laden language. NPQ realizes that budgets are tight, but a living wage should be something that we, of all sectors, should stand for quite firmly. Instead, we get a statement saying we must commit to paying an increased minimum wage and then making a case why nonprofits should be exempt.

As the leadership forum for charitable and philanthropic organizations committed to improving communities and lifting up lives, Independent Sector believes that individuals should have the opportunity to earn a life-sustaining wage that enables them to support themselves and their families. The current federal minimum wage does not do that.

We believe that charitable organizations should be guided by the balanced approach of advancing their missions effectively while striving to pay wages that allow employees to provide adequately for their families, and we therefore support increasing the minimum wage, with some accommodations for nonprofit employers.

Numerous charitable organizations employ seasonal, part-time, and youth employees among others, to provide programs and services that serve the common good. Furthermore, too many of these organizations struggle continuously to meet increased demand for assistance in the face of stagnant, if not declining, revenues. Current federal and state reimbursement rates are insufficient to enable nonprofit organizations to increase wages. Rather than turn away those in need, tens of thousands of these employers balance a commitment to continued employment of staff with benefits, including healthcare coverage, and providing services to as many people as possible.

Recognizing that these factors may prevent some nonprofit employers from moving immediately to increase wages paid to all employees, we encourage those nonprofit organizations in a position to do so to commit to paying a living wage. In addition, we believe that the current federal minimum wage should be increased and that exceptions for some seasonal, part-time, and youth employees should be considered. And, we call on federal state and local governments to increase reimbursement rates to nonprofit service providers to enable them to increase wages to their employees.

While acknowledging the need to preserve the viability of critical programs upon which millions of Americans rely at a time when donations have been mostly stagnant, IS calls on its members and all charitable and philanthropic organizations to pledge to work towards paying a living wage to their workers whenever possible.

“No one wants to back wage levels so low that supplemental public aid programs are necessary for people to get by,” IS President and CEO Diana Aviv said. “Our charitable community has long been dedicated to ensuring that all people have the opportunity to earn wages that make it possible for them to support themselves and their loved ones.”

“We also recognize that for some organizations, the choice between providing care to vulnerable communities and raising wages is very real and difficult,” Aviv continued. “To obviate such choices we encourage donors to increase their gifts and governments to increase their reimbursement rates.”

In general, we wished this statement had fulfilled the promise of its headline. If you want to read more on this topic, NPQ has written a good deal about this issue in the past. One of our more recent newswires on the topic of nonprofits and minimum wage comes from NPQ newswire writer Larry Kaplan: “Min Wage Hikes in Some Fields Require Public Funding Increases.”—Ruth McCambridge