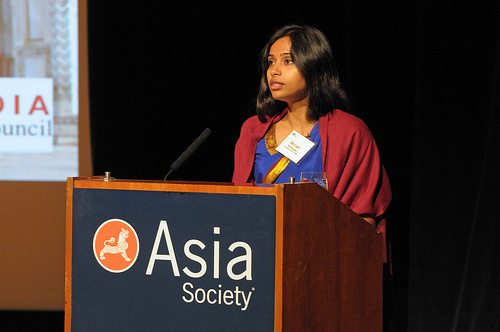 Congratulations to Rama Lakshmi and her editors at the Washington Post for their thorough analysis of the other side of the case involving the Indian diplomat who was arrested in the U.S. for the mistreatment of her nanny or housekeeper (by which we mean paying insufficient wages and requiring work of 90 to 100 hours a week, the equivalent of $1.32 to $1.46 an hour in pay). The U.S. press has generally focused on the salacious part of the story, the strip-searching of diplomat Devyani Khobragade by New York City police, and the diplomatic back-and-forth between the U.S. and Indian governments, but with almost no attention to the situation of the nanny herself, Sangeeta Richard, or the conditions of domestic workers in India and much of Asia.

Human Rights Watch reports that 40 percent of the world’s 53 million domestic workers are employed in Asia where the employees “frequently experience physical, psychological and sexual abuse.” Lakshmi’s article describes the horrible conditions of domestic workers in India, who typically are paid very low wages and have few or any legal protections concerning their labor conditions, such as working hours and time off. She retells gruesome examples of abuse, such as an Indian federal lawmaker arrested on charges of torturing a domestic worker to death and an Indian airline steward who locked her underage maid in her home whenever she went to work. Many domestic workers in India, the exact number unknown, have been victims of human trafficking.

A children’s rights group in India, Bachpan Bachao Andolan (Save Childhood Movement), has been pressing the Indian government for improved legal protections for domestic workers, but the Indian government hasn’t acted yet. In fact, following the Khobragade arrest and indictment, the Foreign Minister of India proposed that Indian maids accompanying diplomats overseas should be designated as government workers to avoid being covered by the minimum wage and working condition laws that got Khobragade arrested. The Indian government has upgraded Khobragade’s diplomatic status, moving her to a post at the United Nations, thus giving her full diplomatic immunity and ensuring that she will not be subject to further U.S. prosecution.

But what about Richard? She may be without options—or worse. The national secretary of Bachpan Bachao Andolan, Bhuwan Ribhu, said, “I have never heard of anybody being arrested and going to jail in India for not paying minimum wages to a worker.” Khobragade’s attorney actually charged that Richard tried to blackmail his client, and at Khrobragade’s request, the Indian government filed charges against Richard and her husband for breach of contract and illegally obtaining a passport with the intention of emigrating to the U.S. (which Richard denies). Because of harassing actions against Richard’s family, the U.S. government flew her husband and children to the U.S. for their own protection and to avoid pressure from the Indian authorities for Richard to return for likely prosecution.

Remember where the New York standards for domestic workers came from. In 2010, New York State enacted a Domestic Workers Bill of Rights statute that called for:

Among the nonprofits that played pivotal roles in passing this law was the National Domestic Workers Alliance, led by Ai-Jen Poo, who has been featured in NPQ articles for her domestic workers organizing and her broader vision of community organizing and activism.

The arrest of Khobragade, even if she will not be jailed, and the Indian government’s plan to treat all domestic workers assigned to their diplomats posted in the U.S. as government employees, rather than private workers with A3 visas, makes this incident more than a minimum wage and hours case. It would appear that this is nothing less than human trafficking, compelling domestic workers employed by Indian diplomats to work like indentured servants or slaves—and there are 14 additional cases concerning Indian diplomats and their maids and nannies currently being investigated by U.S. authorities, according to the International Business Times.

Khobragade is from a family of Dalits (once known as the “untouchable” caste) and is actually known in India as an advocate for the rights of both Dalits and women. As so often happens, it appears that she was attentive to the inchoate rights of a broad stratum of poor women, but not for the woman who she personally employed to take care of her children and house.—Rick Cohen