As the generations in the workforce shift from baby boomers to Generation X to Millennials, the scope and perception of social change is also shifting. The 2014 Social Change Impact Report from Walden University focused on people’s perceptions of their impact on positive social change. The report surveyed adults from Brazil, Canada, China, Germany, India, Jordan, Mexico, and the United States. 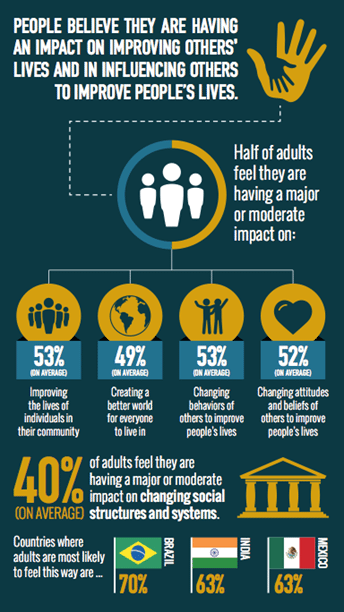 Based on the study, half of adults surveyed think their efforts on behalf of local and global issues are having an impact: They believe they are helping to influence the attitudes and actions of others. Adults who are involved in positive social change also think it’s important that their involvement be toward long-term progress, rather than immediate change.

Two of the main outcomes of the study are that the younger generation is believed to be more passionate about social change and that young adults look to their older counterparts for knowledge and experience.

“Though a millennial spirit seems to infuse this social movement, its demographics are actually multi-generational,” says Joshua Neuman, GOOD’s editorial director and curator of the annual GOOD 100.

In 2014, 82 percent of adults, on average, reported participation in positive action toward social change in the past six months. This participation is classified as using technology to spread messages or donating goods, money, or services. In several countries (Brazil, China, Germany, and the United States), Millennials—those born after 1979—view their elders as less open to trying new ideas and their younger peers as being more passionate about social change.

For Millennials, social change work is important when choosing an organization to work for or provide charitable giving to. In the 2014 Millennial Impact Report, 92 percent of the Millennials surveyed felt they were working for a company that was making a positive impact on the world.

In an October 2014 NPQ article, it was also stated that Millennials have an “action-based philosophy” that is changing the nonprofit sector. These young adults prefer to engage with causes to help people, not institutions. They are influenced by their peers and treat their time, money, and assets as having equal value. Millennials also want to experience a nonprofit’s work without having to be on-site.

As 2015 approaches, reports such as the Social Change Impact Report and the Millennial Impact Report provide nonprofit organizations with insights in order to shape their strategic plans, volunteer recruitment, and fundraising goals for the future.—Erin Lamb