Investors Raise $25M for Change.org and Move it Closer to Big Money 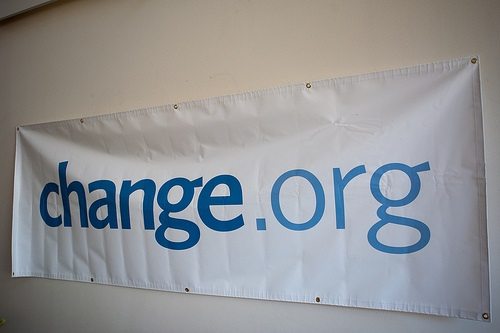 Change.org has a strong international community of supporters who cheer the website’s social justice–oriented mission. Big-name celebrities like Arianna Huffington, Bill Gates and Ashton Kutcher, as well as tech juggernauts like the founders of Yahoo, LinkedIn, and Twitter, have collectively raised $25 million to expand the online petitioning website.

Responsible for hosting a vast variety of online petitions for causes that range from highlighting Walmart’s animal abuses to lifting the ban on women driving in Saudi Arabia, visitors to Change.org who feel connected to a cause can sign their names online to endorse it. Alternatively, they can make petitions themselves, engaging in virtual activism, whether or not it will actually effect change.

While change.org has a decidedly “nonprofit” focus, and many of its clients that pay for petitions are major organizations in the sector like Amnesty International, UNICEF, Oxfam, and the World Wildlife Fund, it is a “B corporation” and has strong corporate ties as well. Pierre Omidyar, the founder of eBay, was among the lead investors in the project, which has raised a total of $50 million since 2007. Those at the helm of the website anticipate this influx of new investors, bringing with it a new wave and brand of interested parties, will help further diversify both the organization and its mission, but in what ways?

“We wanted a group of investors who are passionate about our mission and who have experience that we could learn from,” Jen Dulski, president and chief operating officer at Change.org, told CNN Money.

While some petitions are notable because of the number of signatures they accumulated, like the petition that was initiated after Trayvon Martin’s death, which reached over 2 million signatures, other petitions may have contributed to some real world changes. Following petitions, the Gap stopped selling fur while Old Navy made major changes to its plus-sized line. Victoria’s Secret changed the slogan of one of their ads (which Change.org petitioners took credit for) and Meriam Ibrahim, a pregnant Sudanese woman who had been sentenced to death for practicing Christianity, was released and allowed to leave the country to seek asylum elsewhere.

But, at the end of the day, how many of these changes were directly driven by Change.org petitions? And while some stores changed their policies or ad campaigns, has Change.org led to any kind of political impact? As with any form of activism, it’s difficult to pinpoint when and where exactly change starts to occur and how much of it is citizen-driven.

As noted by the Guardian, small online petitions, even those with millions of signatures, can enact positive change. They can start discussions that ebb and flow their way to Congress in the form of bills and laws. There’s a currently active petition with over 130,000 signatures, for example, calling for the passing of a law requiring police officers to wear body cameras. While the proposed “Michael Brown, Jr. Law” has yet to gain traction, there are already serious discussions taking place evaluating the need to equip police departments with this added level of oversight. What part the petition had is unclear.

One can only imagine that Change.org understands that the siren song of big money can lure us into places where our very mission can be slaughtered, but we would love to hear from readers on this.—Shafaq Hasan