Invisible Homeless Youth Forced to Fend Largely for Themselves 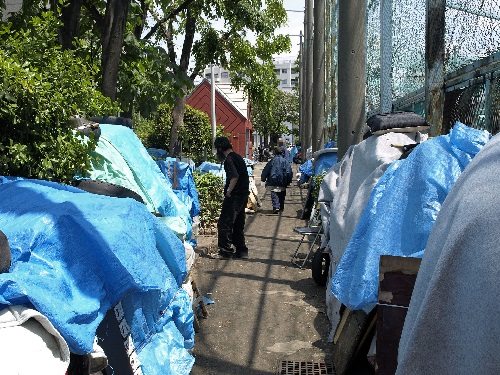 Two years ago, after taking care of a sick mother and siblings, 17-year-old Jazmien was left on her own by her mother in Dallas and became one of thousands of homeless teens in the Dallas, Texas area. In affluent suburban Collins County in Texas, the local homeless coalition counts 1,310 homeless students registered in school districts, though the actual number of homeless kids may be much higher. Jazmien is just one of tens of thousands of teens who might not make the official counts of homeless youth, even though they are clearly living in shelters, on friends’ couches, or in the streets.

In Connecticut, the homeless youth are invisible, which isn’t surprising, but the services available are often invisible to them. The New Haven Register tells the story of Janai Kemp, who began “couch surfing” at the age of 14. Thirteen years later, he was still homeless. During this time, he was unaware of and certainly not accessing services that might have been available to him as a homeless young person.

At the end of 2012, there were 2,804 homeless students registered in public schools, up 50 percent since 2008. That has to be an undercount, as homeless youth are counted in the schools primarily because they self-identify as homeless. A kid sleeping on a relative’s or friend’s couch, lacking the security of a permanent roof over one’s head, might not self-identify as homeless. Even if that 2,804 figure were accurate, as it most assuredly isn’t, there are only 15 emergency beds in the entire state for homeless youth.

As a young homeless person, Janai Kemp didn’t know about programs that might focus services on homeless youth, so he went to adult shelters, which the Register says “are poorly equipped to deal with the needs of a teen or young adult.” But with thousands of homeless youth in the state, what could the young Kemp have expected had he even known where to go? What happens to homeless youth who don’t get the help they need? A number of agencies in Connecticut convened recently to discuss what happens, which a reporter for the News Times summarized as “increased risk for sexual abuse, being lured into prostitution, physical abuse, criminal justice involvement, illness and suicide, dropping out of school, mental health problems and substance abuse.”

In Sonoma County, California, Gayle Guynup, a local judge and a former vice president of the nonprofit Social Advocates for Youth (SAY), says that there are about 1,200 homeless young people in a county better known for wine and gustatory tours. The organization has long provided temporary shelter for homeless youth and is hoping that public authorities will approve the conversion of Sutter Health’s Warwick Hospital into a SAY facility for counseling and for as many as 63 living spaces for homeless young people. Whether it is Connecticut, the nation’s wealthiest state, or Sonoma and Colllins counties, the gaps between the count of homeless youth and the available housing for them is huge.

The flurry of articles on homelessness at this time of year tend to lead to requests for charitable donations and profiles of the good men and women who are volunteering to help homeless kids, like the people at SAY, apparently well respected in Sonoma, or Denton County Youth Today (YoTo) which operates a drop-in center at a Lewisville, Texas Methodist church on weekdays, or Journey to Dream, a faith-based nonprofit in metro Dallas that is trying to raise $350,000 to purchase one home that might be converted to use as temporary shelter for 14 homeless youths. Charitable giving around the holidays to help homeless kids is fine, but these are really problems that require societal public policy responses.

Based on the numbers cited in reports like these and others, such as the 921 homeless youth in the “official” count of homelessness in metropolitan Denver, homeless youth are more numerous than most people imagine, and their population is unfortunately increasing. Public policies are not being enacted and funding is not being provided in any way commensurate with the need. Leaving kids on the street to fend for themselves reflects poorly on the world’s wealthiest nation.—Rick Cohen