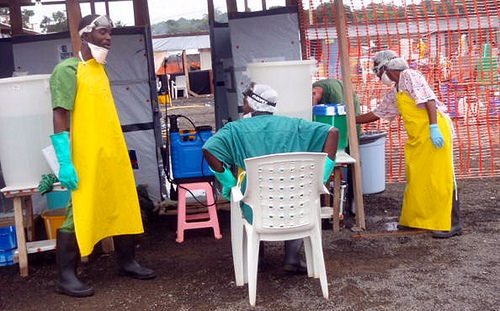 The well-respected New York Times columnist Nicholas Kristof penned a compelling analysis about the failure of the response to the Ebola epidemic. He argues that “it’s imperative to stop infectious diseases early,” emphasizing the importance of childhood vaccines and other early interventions, and he worries that efforts to finance responses to Ebola will come at the cost of diverting funding from providing vaccines or fighting hunger.

Clearly a major need in the countries facing the Ebola epidemic is investment in order to build modern health systems and to remedy shortages in human resources such as trained doctors and nurses. For example, prior to the outbreak of the Ebola epidemic, there were fewer than 200 doctors available for Liberia’s nearly 4 million people; since the outbreak, the number of doctors has dropped to about 50 as doctors have fled the country. Kristof argues that tons could be done if the U.S. invested in health rather than our ever-expanding military.

However, Kristof’s argument includes an odd diversion to suggest the “market failure” that explains dysfunctional government efforts, whether fighting Ebola or reducing prison recidivism, could be addressed by “new financial instruments—social impact bonds…[that] pay for job training or early education programs and then earn a financial return for investors when the government saves money.” Is Kristof hinting that social impact bonds could be used as a tool for dealing with the health issues facing countries in West Africa, or even confronting Ebola?

The lack of preventative action against Ebola isn’t just market failure, and effective action against public health crises in West Africa are unlikely to be addressed by private investors putting money into social impact bonds. There might be good uses out there for SIBs, particularly if they generate up-front risk capital for the front-end costs of nonprofit initiatives, but SIBs aren’t all-purpose social program panaceas and are hardly likely to generate resources commensurate with the scale of needs involved in fighting major systemic problems like the barely existing and currently collapsing health systems of the countries affected by the Ebola outbreak.

In the recent Ford Forum, Nobel Prize-winning Yale economic Robert Shiller reveals an attraction for benefit corporations as socially responsible alternatives to big global corporations that haven’t demonstrated much of a commitment to meeting social and environmental norms. (For a deeper examination of Shiller’s thoughts, read today’s newswire, “Ford Foundation: Can Capitalism Be Made to Work Better for Society?” Shiller suggests that benefit corporations with social goals such as “promoting the community or cleaning the environment” in their charters would be protected from shareholder litigation against their pursuing their “idealistic goals” and in fact could be sued if they didn’t. However, in comparison to the corporate world, which Shiller believes needs government regulation to compel their social responsibility, Shiller notes that the 1,000 or so benefit corporations are small. He doesn’t imply that they’d constitute a significant alternative to compete with Wall Street firms and other entities that need—and, by virtue of their lack of accountability, have earned—the coverage of regulations such as Dodd-Frank.

Shiller is a fan of benefit corporations, but he doesn’t seem to approach the exuberance Kristof holds for social impact bonds. There may be uses for benefit corporations and even social impact bonds that are positive and productive, but the challenges of building healthcare systems in countries that barely have anything, of providing the vast supplies of vaccines needed in African nations, and of combatting epidemics such as Ebola are far beyond the potential of SIB-like investment vehicles. To hint, even obliquely, that SIBs and benefit corporations are up to the task of meeting international crises such as AIDS, Ebola, and the lack of functional modern health systems shows an exuberance for social enterprise that is not justified.—Rick Cohen