As Charlotte’s Catholic Diocese opens low-income housing for the disabled, affordable housing and disability advocates must be wondering if this is the end of an era in housing development. Financed by a Section 811 capital grant with supplemental state and local funding, Mother Theresa Villa is part of what is planned to be a twenty-acre affordable housing campus. But despite the best intentions of the sponsors and developers and the undeniable enthusiasm of the initial residents, does it make sense to put 253 units of affordable housing with “wrap-around” services for seniors and disabled households in an undeveloped neighborhood on the outskirts of Charlotte?

In the now-famous Olmstead decision, the U.S. Supreme Court ruled that “unjustified segregation of persons with disabilities constitutes discrimination in violation of title II of the Americans with Disabilities Act. The Court held that public entities must provide community-based services to persons with disabilities when (1) such services are appropriate; (2) the affected persons do not oppose community-based treatment; and (3) community-based services can be reasonably accommodated, taking into account the resources available to the public entity and the needs of others who are receiving disability services from the entity.”

The new Mother Theresa Villa project seems to be exactly the answer to the challenge raised in Olmstead v. L.C. As early as 1990, HUD moved to create this new development program modeled on its Section 202 program for the elderly. As originally designed, nonprofit developers could get a capital grant for construction and a Housing Assistance Payments contract to pay the difference between 30 percent of tenant income and the rent needed to operate the development.

Under the 811 program, services are provided as a part of the management contract. At Mother Theresa Villa, “The diocese is partnering with InReach, a non-profit organization in Charlotte that has provided residential services and community support to the disabled since 1974. InReach already operates 14 group homes and numerous scattered apartments in Charlotte for very low-income disabled adults.”

Even as tenants are moving into Mother Theresa Villa, federal policy is changing on several fronts. Given the present policy trajectory, there most likely won’t be another project like Mother Theresa Villa in the foreseeable future. That’s because HUD has reshaped the 811 program to encourage states to get housing developers to set aside units for persons with disabilities within existing developments. This more integrated approach to funding “special need” units is in keeping with HUD’s renewed interest in inclusion. Technical Assistance Center, a national nonprofit technical assistance and consulting company, describes the new approach this way:

Using the new Section 811 integrated model, supportive housing units are included in high quality affordable rental properties that primarily assist households without disabilities. To maximize opportunities for community integration, this new Section 811 approach requires that no more than 25% of the units in any Section 811 funded property be set aside for people with disabilities.

New regulations on Affirmatively Furthering Fair Housing provide another challenge to the larger project envisioned by the Diocese. The Charlotte Observer article describes Jerry Widelski, head of the Catholic Diocese of Charlotte Housing Corp., as uncertain about the next phase of the project. “It’s unclear when his organization will start the next phase of Mother Teresa Villa. Funding is the biggest challenge, he said.” Part of that lack of clarity may be the realization that local and state government agencies will soon need to make plans to “Affirmatively Furthering Fair Housing.” This new regulation could make funding a suburban campus for low-income households less of a priority.

Earlier this year, NPQ’s Rick Cohen highlighted the housing needs of disabled people in the newswire, “The Affordable Housing Crisis of Persons with Intellectual and Developmental Disabilities.” Cohen described some new ideas for disability housing, such as including loans for adding accessory units to single family properties and using subsidized Individual Development Accounts (IDAs) so that persons with disabilities could have down-payments for home purchase. These development options are in stark contrast to the Mother Theresa Villa, where housing is for disabled only and tied to resident services.

Separating housing from services is another “theme” of current policy thinking. New rules from the Center for Medicare and Medicaid Services are forcing state agencies to dismantle residential and service delivery. While these rules don’t apply to non-state agencies, one can envision the possibility that CMS could further enforce a separation of housing and services. More and more, disability advocates are viewing projects like Mother Theresa Villa as a stepping-stone for persons making the transition from institutionalized living to independent living.

In another NPQ article, Rick Cohen addressed some of these potential conflicts in “Tenant-Landlord Controversies at Nonprofit Housing Complexes.” And a news story from New York where “renters say they’ve been unfairly evicted” raises similar, even more dramatic stories of the conflicts of interests that can arise in combining housing management and case management.—Spencer Wells 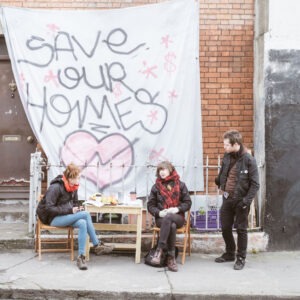