Is It Time to Rethink the Electoral College?

When you voted for president and vice president of the United States on November 3rd—or by mail, or through in-person early voting—you really didn’t. You technically voted for electors. These people make up the Electoral College, and it is their votes that will be counted and accorded to whomever won the popular vote in the state. The winner gets all the electors—unless you live in Maine or Nebraska, where the winner of the state gets two electors and the rest go to whomever wins each congressional district.

The Electoral College convenes on December 14, 2020, and that is when this election will truly be determined. In many ways, it makes the cry of “every vote counts” sound a bit hollow. There are many who feel that the Electoral College system is not the way to select the president of this country and are seeking ways to move to a decision by popular vote.

The National Popular Vote Interstate Compact is an effort to move the needle toward a presidency that is the result of the popular vote of the American people. According to the materials on their website, the Compact ensures that every vote, in every state, will matter in every presidential election. The Compact is a state-based approach that preserves the Electoral College, state control of elections, and the power of the states to control how the president is elected.

The state of Colorado has become the 15th state, along with the District of Columbia to join in this effort. Together, they represent 196 of the 270 electoral votes needed to elect a president. Inching toward that 270 number is as important for the Compact as it was for the presidential candidates on November 3rd of this year. Once enough states sign on to garner 270 electoral votes, it will effectively mean that the winner of the national popular vote automatically earns a majority of the electoral college.

Getting states to sign on, however, is not a slam dunk. In Colorado, a measure to join the Compact first was considered in 2006 and failed to get through its state legislature multiple times. When Colorado joined last year, it was challenged by the group Coloradans Vote, who gathered enough signatures to ask voters to in a statewide referendum to confirm or repeal the law.

The Compact is clearly more popular in states that are lead or lean Democratic rather than Republican. One fear from the Republican side is that candidates would only focus on population centers and big cities which tend to be Democratic strongholds.

But Sylvia Bernstein who is the coalition coordinator for Yes on National Popular Vote campaign, disagrees. She feels that candidates should be forced to cover the entire country and not just focus on certain swing states.

“It shouldn’t be a partisan issue,” Bernstein said. “The reason why people should support the national popular vote is pretty simple…the candidate with the most votes should win, just the way it happens in every other election in this country.”

A map depicting states where there were campaign events in the 2016 election (states not on the map had no events) demonstrates Bernstein’s point. It takes no genius to recognize that the current system favors “battleground” states at the expense of everyone else. Notice, for example, that New York does not even make the map while much smaller New Hampshire dominates the northeast. In the West, Nevada (population 3 million) dwarfs California (population 39 million). 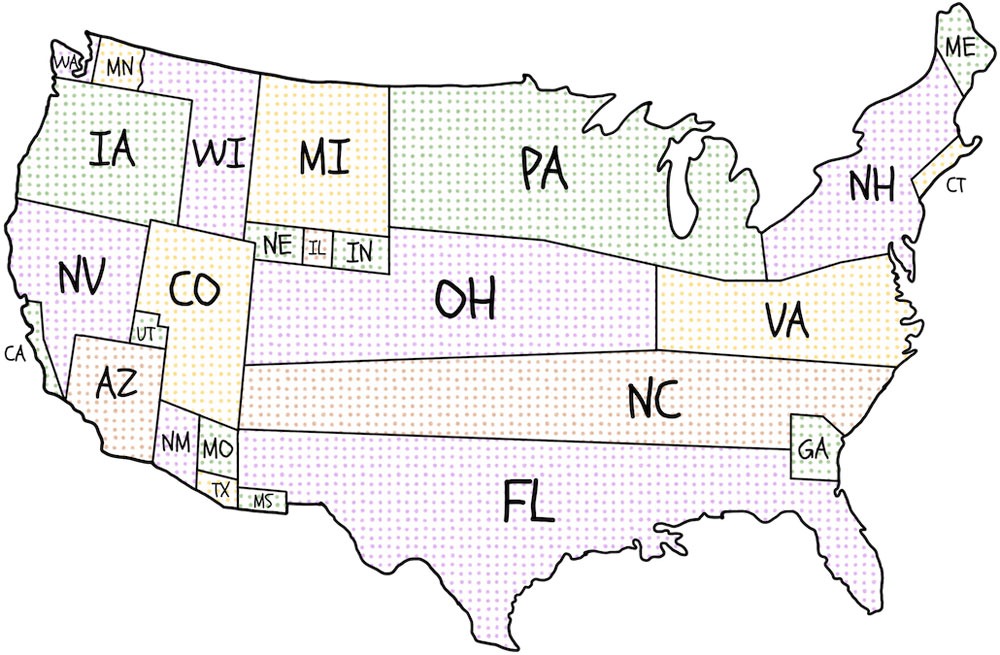 All of this brings us back to our Electoral College system and its purpose in our system of governance. Our founders chose it for a number of reasons. They were embarking upon an untested form of government and worried that voters might not make informed decisions. While they did not want to tell states how to conduct elections, they also were concerned the states with the largest voting populations would end up choosing the president. Others thought that Congress should choose the president. The Electoral College was where they were able to meet in the middle.

It should also be acknowledged that the Electoral College was also a way to build up the power of the slaveholding populations in the South. The formula for apportioning congressmen, which is directly tied to the number of electors, relied at that time on the Three-Fifths Compromise, whereby each enslaved person in a state counted as fraction of a person to apportion congressional seats. Thus, states in the South with many enslaved people had more voting power even when large parts of their populations could not vote and were not free.

The 13th Amendment abolished slavery, but the Electoral College system remains. Today, there’s an elector for every member of the House of Representatives (435) and Senate (100), plus an additional three for people who live in the District of Columbia. The total is 538. To reiterate, this is why the 270 number is so critical to the National Popular Vote Interstate Compact. If states with 270 electoral votes all mandate that their electors ratify the national popular voice choice, then the winner of the popular vote automatically wins an electoral college majority.

Don Wilson, a Republican co-founder of Coloradans Vote, along with Bernstein and others are now looking beyond Colorado to the next states toward their goal of 270 or more electoral votes. They anticipate the inevitable court challenge, but they are ready for it and believe the Constitution is on their side. As Bernstein said, “The Constitution is very clear that state legislators have the exclusive and plenary right to award the state’s electors however they so choose. And so that’s exactly what this compact does.” Given the angst of the 2020 election, perhaps other states will be in the market for something new.—Carole Levine