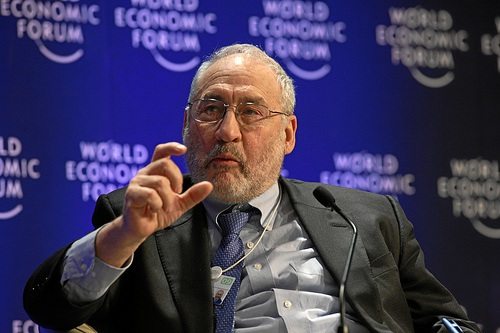 Actually, he makes the point with more grace: “[W]ith inequality at its highest level since before the Depression, a robust recovery will be difficult in the short term, and the American dream — a good life in exchange for hard work — is slowly dying.” Moreover, Stiglitz suggests that “after four decades of widening inequality and the greatest economic downturn since the Depression, we haven’t done anything about it.”

Stiglitz cites four reasons for the power of inequality to “squelch…our recovery.” He writes that “our middle class is too weak to support the consumer spending that has historically driven our economic growth.” Next, he notes that “the hollowing out of the middle class since the 1970s, a phenomenon interrupted only briefly in the 1990s, means that they are unable to invest in their future, by educating themselves and their children and by starting or improving businesses.” Additionally, Stiglitz asserts that “the weakness of the middle class is holding back tax receipts…[so that] the government cannot make the vital investments in infrastructure, education, research and health that are crucial for restoring long-term economic strength.” Finally, he adds that “inequality is associated with more frequent and more severe boom-and-bust cycles that make our economy more volatile and vulnerable.”

This is not just an issue of economics, according to Stiglitz. “Economic inequality,” he writes, “leads to political inequality and a broken decision-making process.” Not surprisingly, he whacks both President George W. Bush and President Barack Obama for having invested in saving banks without having invested in homeowners, workers, and the young. Too late? It’s not clear, but Stiglitz recommends “a comprehensive response that should include, at least, significant investments in education, a more progressive tax system and a tax on financial speculation.”

The equally brilliant Nobel Prize-winning economist Paul Krugman published a brief critique of Stiglitz’s analysis, suggesting that Stiglitz is wrong on the underconsumption analysis and wrong about our tax system’s lack of progressivity, especially when federal taxes are combined with state and local taxes. Economists can argue whether aspects of inequality do or don’t contribute to a prolonged recession or retard prospects for an economic recovery. However, Stiglitz is pointing to more than an economist’s perspective. Rampant and increasing inequality, he indicates, tears at the social fabric of our nation. The social and economic inequality of the U.S. shows up not only in a broken political system that picks candidates for office, but in a legal system which, Stiglitz says, has “provided more scope…for abuses by the financial sector; for perverse compensation for chief executives; for monopolies’ ability to take unjust advantage of their concentrated power.”

Krugman and Stiglitz can debate savings rates and tax receipts, but the lesson that jumps out at us from Stiglitz’s analysis is that inequality undermines the nation’s ability to make our society more livable for people who don’t have wealth, power, and access. Even if they don’t have Nobel Prizes like Krugman and Stiglitz, most nonprofit leaders on the front lines of fighting poverty know that all too well.—Rick Cohen