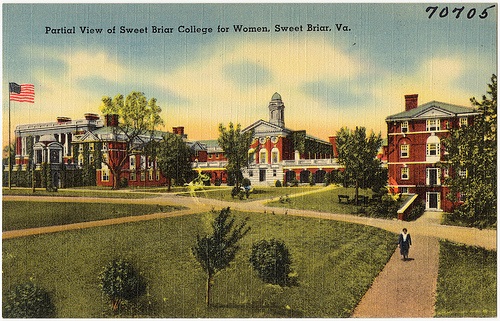 NPQ has been following the case of Sweet Briar College, where the board and president voted to close the institution only to be faced with a storm of objections by alumnae, donors, and faculty. A resistance group called Saving Sweet Briar quickly emerged and has raised pledges worth $10 million, demanded the board and president resign, and mounted a legal effort to enjoin the college from closing. One of the suits being pursued was brought by Amherst County Attorney Ellen Bowyer and joined by a group of faculty and staff; this suit was heard over two days with a decision that is less than satisfying to Saving Sweet Briar.

At a Bedford circuit court hearing Wednesday, Judge James Updike refused to enjoin Sweet Briar College officials from proceeding with their plans to close the institution, but he did rule that they were not to use any charitable contributions to pay for that process. He based the ruling on the limited standing of Amherst County Attorney Ellen Bowyer, who had been given standing to bring the suit despite opposition expressed in an amicus brief filed by the Attorney General. Ruling that the college was a corporation rather than a trust, the judge declined to issue a broader injunction that would have provided time and a fair process for reviewing the sustainability of the college by not only blocking the closure process but also removing the president and board. The county attorney is apparently moving forward with an appeal.

In all of these legal actions, the question of who has judicial standing has been central. The core requirement of standing is that you have been harmed or are in imminent danger of being harmed by the actions of the defendant. But judicial standing is one thing; basic respect for partners who have long invested their time and treasure in you on the understanding that your futures are tied up together is another. Nonprofits depend upon such partners in general, and Sweet Briar is no different. NPQ wrote earlier about what appeared to be a lack of ethical behavior on the part of the college president, who accepted a million dollar pledge from Theresa Tomlinson (an alumna and the mayor of Columbus, Georgia) right before the decision to close was made with a nice handwritten note that read, “What a wonderful thing you have done!” Tomlinson said she was never informed that anything was amiss.

A few days ago, on Monday, April 13th, Mayor J. Paul Kilgore of Amherst, Virginia, sent a letter to Sweet Briar’s president James F. Jones, Jr., and Board of Directors chairman Paul G. Rice, entreating that “every avenue be explored to restore the financial viability necessary to keep this historic and unique institution alive for another century.” Kilgore makes a distinction between legal standing and the town’s very real standing as a partner. In the close relationship between Amherst and Sweet Briar, he writes, if one side were removed, the other would suffer.

He writes that Amherst has invested in Sweet Briar as a partner in, for instance, constructing a waste water treatment plant in the early ’70s when Sweet Briar needed it, and again in 1996 when Amherst allowed Sweet Briar to connect to Amherst’s system, selling the water to Sweet Briar at lower rates than are charged to other consumers.

“We have obvious concerns that the cessation of operations and closing of Sweet Briar College will have a tremendous negative effect on the Town of Amherst in the areas of economic activity, education and culture,” Kilgore wrote. “We are also concerned about the employees and tenants of on-campus housing who have been or will be disrupted by the closing who are ‘de facto’ utility customers of the Town.”

While “judicial standing” is one thing, writes Kilgore, “it is beyond question that the Town of Amherst has ‘standing’ as a partner, stakeholder and, depending on the future outcome, casualty of the closing of Sweet Briar College.”—Ruth McCambridge