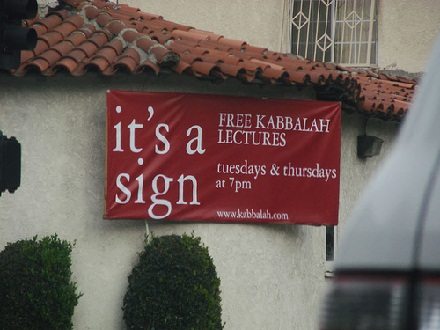 Maybe it is only in Los Angeles that a cultish religious organization meant to teach the Kabbalah, a mystical form of Judaism, would attract the involvement of celebrities such as Demi Moore, Ashton Kutcher, Britney Spears, Paris Hilton, Sumner Redstone, Christine Peters, Gwyneth Paltrow, Elizabeth Taylor, Sandra Bernhard, and Madonna and then vault from obscurity into big time money. The Kabbalah Centre participated in Madonna’s controversial plan for a school in Malawi and is now embroiled in what looks to be a scandal involving a woman with dementia.

A former socialite, Susan Strong Davis is an 87-year-old widow suffering from dementia. Notwithstanding her illness, somehow she has managed to borrow $2.65 million to build a 4-bedroom, 3-fireplace house in Beverly Hills—and to donate $600,000 to the Kabbalah Centre from her personal wealth, which apparently totals approximately $11 million.

The gatekeeper between Davis and the Kabbalah Centre is one John E. Larkin, who serves as Davis’ financial advisor and is a student of the Kabbalah. The site of the Beverly Hills home is also connected to Larkin; he owned it and sold it to Davis, according to the LA Times, “at a substantial personal profit.” As scummy as the house deal might sound, the NPQ Newswire is more interested in Davis and Larkin’s relationships with the Kabbalah Centre, which has been the subject of an ongoing IRS investigation.

The $600,000 donation from Davis raises the question of the role of financial advisors or wealth advisors, many of whom are ubiquitous in guiding the charitable giving of very wealthy people. Larkin is no unknown figure, having advised Ricardo Montalban and Candice Bergen among other celebrity clients. How he came to know Davis isn’t clear, but he was put in charge of Davis’s personal filings and, with a second trustee, George Dickinson, has made $900,000 managing her finances since 2002.

Larkin is beyond close to the Kabbalah Centre. He became involved with the Centre in the early 2000s, married an official from the Centre as his fourth wife (with the ceremony performed by the son of the Centre’s founders, Philip and Karen Berg), bought a home on the same Beverly Hills block as the Bergs, and managed personal investments for the Bergs and some of their “celebrity followers.”

In 2006, one of the Centre’s charities, Spirituality for Kids (once chaired by Madonna), received the $600,000 contribution—its largest—from Davis, with Larkin’s office as her address. Davis’s family said that Davis was nominally Protestant, but had no interest in religion, didn’t go to church, and during her increasingly rare moments of clarity during the last decade, never mentioned the Kabbalah Centre or Spirituality for Kids. For all anyone knows, that $600,000 gift might have been one of several, but for some reason, Spirituality for Kids revealed its donors only that year and has not done so since, and the Centre keeps the names of its donors secret.

The donation from Davis to Spirituality for Kids seems to be Larkin’s responsibility as her trustee. The other trustee, Dickinson, didn’t seem to have much contact with her or concern for her finances, telling the LA Times, “I’m a trustee, not a guardian. She can give it all to the dog and cat hospital if she wants.”

Madonna or no Madonna, it seems as though there’s something very curious happening at the Kabbalah Centre. The IRS has had a long enough time to look at it and come up with a judgment, but the prolonged investigation has so far left everyone hanging. In addition to whatever issues might exist at the Kabbalah Centre, there’s also a concern about financial advisors like Larkin. We would love to hear from the community of financial advisors to the wealthy as to what oversight and self-policing mechanisms are in place, as well as who should be looking over the shoulder of advisors like Larkin to make sure that the charitable donations he guides from his clients’ accounts—especially if the clients are suffering from dementia—are on the up-and-up. –Rick Cohen