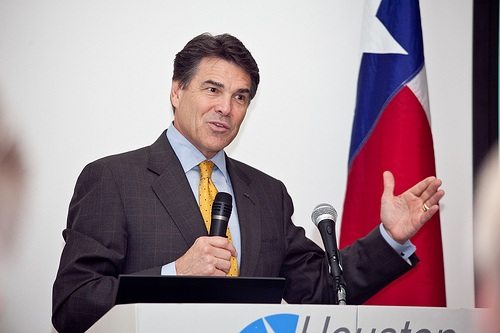 A slightly obscure type of nonprofit status has gotten a lot of attention all of a sudden. Controversy has erupted around organizations with 501(c)(4) status and their right to keep the roster of donors anonymous while engaging in some overtly political activity. NPQ has extensively covered the story in Washington about the IRS and its alleged targeting of applications for the status from organizations that are Tea Party-related for additional investigation. A related story has also been unfolding in Texas, where Gov. Rick Perry has vetoed legislation that would have required organizations with 501(c)(4) status to have levels of transparency similar to those of charitable organizations with a 501(c)(3) designation.

Kel Seliger, a Republican state senator from Amarillo, authored a bill that would require these politically active organizations to reveal their donors. An article in the Texas Tribune quotes him as saying that Governor Perry’s veto marks a “sad day for integrity and transparency in Texas.” Senator Seliger suggests that this veto legitimizes “money laundering” techniques. In his statement about the veto, Gov. Perry said that the bill would have had a chilling effect on donors’ “constitutional right to freedom of speech and association.”

The veto was hailed as a positive step by such groups as the Texans for Fiscal Responsibility. The head of that organization (which, not coincidentally, has the 501(c)(4) designation), Michael Quinn Sullivan, said in an open letter on their website that Gov. Perry has “saved Texans from the threat of harassment and intimidation” simply because they had supported a politically-active organization. Texans for Fiscal Responsibility would appear to be an overtly partisan group, as evinced by their rankings of Texan legislators in which every Democrat was given an “F.”

On the other side of the equation, the Texans for Public Justice, also a 501(c)(4) nonprofit, said the veto allows Gov. Perry’s “far-right friends [to] play politics under their own special set of rules…No one will have to take their hoods off.”

The veto ensures the bill is dead for now, although Sen. Seliger has said he will reintroduce it if a special session is called. Earlier, though, some interesting events surrounded the bill. The Senate had passed it by a vote of 23-6 and sent to a House committee for consideration. However, a day later, after a round of what must have been very heavy lobbying from outside groups, the Senate voted 21-10 to reverse themselves and call the bill back. Sen. Dan Patrick, who sponsored the motion to recall the bill, was given an “A+” by the Texans for Fiscal Responsibility, while Sen. Seliger received a “D+.”

The issue of transparency has become a hot topic in the wake of the Supreme Court’s famed “Citizen’s United” decision. Millions of dollars are now flowing into highly partisan groups that have been given charitable status by the IRS. These organizations purchase airtime during elections, lobby legislators, and use other tactics to promote their views. As noted in an earlier NPQ newswire, this is what William Schambra would describe as subversion of the social contract through direct intervention in the connection between legislators and their constituents. If this is going on, do we not have the right to know who is involved in attempting to affect legislation that affects all of us? Perhaps we could even give these donors a grade, as Texans for Fiscal Responsibility does for legislators. Maybe that’s what they’re afraid of.—Rob Meiksins