Kenny Stills Makes a Social Justice Journey in the South

Dolphins wide receiver Kenny Stills caught 58 passes for 847 yards and six touchdowns in 2017, despite a checked-out, ripped-from-the-retirement-scrapheap Jay Cutler throwing him the ball. He also knelt during the National Anthem before games, something Miami Dolphins owner Stephen Ross says will no longer happen. However, what he has been up to this offseason has been far more interesting than his on-field achievements this year.

The Southeastern region of the United States lags behind the rest of the country in a number of ways. Despite rapid growth areas like Atlanta and Charlotte, educational attainment and economic opportunity for large portions of the South still fall short. Nonprofits native to the region are working to put the Southeast in position to grow and thrive over the long run.

As the South Grows, a collaborative project from the National Committee for Responsive Philanthropy (NCRP) and Grantmakers for Southern Progress (GSP), highlights successful methods and warns of the failures of philanthropic activities in the South. The project involved interviewing more than 90 community nonprofit leaders to find the challenges, opportunities, and assets in the South. The project finds that while the region is rich in culture and leadership, it remains overlooked by funders, despite opportunities to help in several ways.

Progress toward meeting the South’s needs, as expounded upon in the series of reports, requires utilizing the South’s grassroots infrastructures that understand the rich tapestry of cultures that overlap in the region. There is a need for recognizing leaders outside of major organizations and an understanding that these leaders will need to be the one’s driving their communities toward long run prosperity.

Enter Kenny Stills, who just wrapped up a long trip through the South visiting groups and people working to fight for equality and social justice. He visited with high schoolers in Kentucky and Tennessee. He went to the Women’s March in Charlotte. His trip took him to the National Civil Rights Museum.

Last month I took a road trip through the south to see the work being done in the fight for equality and social justice. Didn’t spend much time on my phone because I wanted to be fully in the moment.

This should come as no surprise. Despite being bemoaned as all talk and no action by some, many players in the NFL are philanthropically active. Hardly fitting the “unpatriotic” label so often thrown around, professional athletes are working to improve their country. In this case, in a region that is overlooked by national funders, by visiting activists on the ground where they work.

Stills went on to meet with Colin Kaepernick in New Orleans to attend the Know Your Rights Camp put on by Mr. Kaepernick. At each stop of his tour he saw local leadership as evinced by the thriving activity in the area, illustrating beautifully the point that As the South Grows is making.

The organizations Stills visited are attempts to solve problems at the local level by leaders who know the areas and people. These community groups understand what the community needs better than an outsider can. All they need is the proper support.

Stills embarked on a journey that highlights the natural leadership abundant in the South. With greater publicity and increased awareness of the needs of the Southeast, nonprofits will be able to leverage social institutions for high impact philanthropy.—Sean Watterson 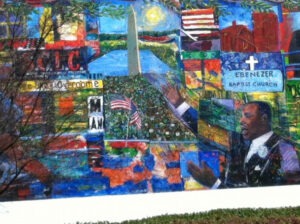