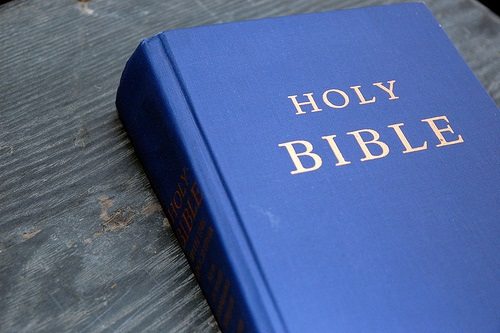 “So, picture Adam being able to crawl up on the back of a dinosaur! He and Eve could have their own personal water slide! Wouldn’t that be so wild!”

That’s not an Old or New Testament verse, but a kid-friendly biblical exegesis in a lesson of the Mercer County, West Virginia “Bible in the Schools” program that “provides bible study to elementary and middle school students in 19 public schools throughout Mercer County.”

This imaginative rendering of Christian Creationism gets right to the bottom of this latest battle over bibles in public schools, Freedom from Religion Foundation, Inc. et al v. Mercer County Board of Education, et al. Hiram S. Sasser, an attorney for co-defendant Mercer County Board of Education, considers this line an exemplar of “history and literature,” apropos for the county’s public schools, while the plaintiffs say in their January 2017 complaint cited above that this statement is part of an unconstitutional program that “advances and endorses one religion, improperly entangles public schools in religious affairs, and violates the personal consciences of nonreligious and non-Christian parents and students.”

Co-plaintiff Jane Doe is the mother of kindergartner Jamie Doe, who faces the prospect next year of 30 minutes one day per week of the bible study program offered to elementary school students, while middle-schoolers in Mercer County receive 45 minutes weekly—all during the normal school day, unless an individual student opts out. Only four district schools do not provide bible study classes. The plaintiffs’ complaint states that according to school district policy, the classes are optional and those declining are provided “reasonable alternatives,” but that “upon information and belief, students at many schools have not been receiving alternative instruction.”

The most crucial nub of the controversy is the destructive stigma attached to the minority of students whose families keep them out of the religious instruction. Parents who don’t want their children in the bible classes are stuck with a hapless Morton’s Fork—either they abandon their First Amendment rights under the federal constitution (and similar rights under the West Virginia state constitution as well) or isolate and subject their children to the painful crucible of youth social pressure: “Jamie will therefore be made conspicuous by absence, and essentially be identified as a non-Christian or nonbeliever, subjecting Jamie to the risk of ostracism from peers and even school staff.”

The plaintiffs complain that the bible study program’s plethora of “scripted interpretations” are anything but history and literature and serve “no legitimate secular purpose.” The complaint states that Mercer County public schools have housed bible study classes since 1939, and that the county modified the program in 1985 after several parents complained to the state’s Education Department, leading to the current funding of bible classes privately, though in all other aspects, the program is administered by the Mercer County Board of Education.

The defendants in their motion to dismiss call the plaintiffs’ claims, including the alleged ostracism, “speculative,” as Jamie Doe is not yet of the age of bible study instruction, which begins with first graders. They also point out the exclusively private funding, which comes from Bluefield Bible Study Fund, Inc. The complaint describes Bluefield as a “501(c)(3) corporation created to organize, form, and operate a fund to pay for teachers of the bible in Mercer County Schools for approximately 4,000 students.”

Attorney Sasser, who works for First Liberty Institute, a Texas-based nonprofit focused on religious freedom, states that the bible study classes serve a “cultural enrichment objective, to make sure that students obviously have the social currency to interpret Western literature.” The Christian bible, comprising the books of the Old and New Testament, is regarded close to universally as a foundational work of literature itself, but Sasser doesn’t explain how such things as dinosaurs providing a water theme park for Adam and Eve are lenses through which young minds can get a foothold in the globally-infused foundation of writing that undergirds our diverse culture.

Annie Laurie Gaylor, president of lead plaintiff Freedom From Religion Foundation of Wisconsin, has noticed the rising trend of religious teaching violating the federal Constitution. She sees greater challenges for the enforcement of the First Amendment coming under the Trump administration, with DOE Secretary Betsy DeVos leading efforts to expand use of school vouchers, which will draw funds from public education spending towards private schools, of which a large percentage are religious institutions.

The Mercer County case may take years to wind its way through the federal court system before a final determination is made, perhaps by the Supreme Court itself. And regardless of who conclusively wins in court, the enforcement of any holding will likely engender more suits for many years before a clear and uniform principle can guide all school districts throughout the fifty states. The plaintiffs are seeking an injunction to halt bible study classes, while the defendants have filed a motion to dismiss the case in its entirety, stating that there is no viable claim due to “the fact that over a half century of well-settled law holds that the Constitution permits Bible classes in public schools.” No decision has been made yet for either request.

With the prospect of a return to a decidedly-right leaning Supreme Court, and with Trump’s potential to nominate hundreds of conservative judges throughout the federal court system, the fate of what many interpret as the Constitutionally-enshrined freedom from religion, as well as the freedom to practice the religion of their choice, is uncertain.—Louis Altman