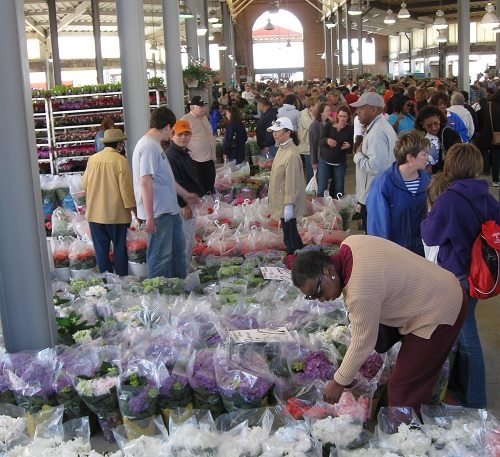 When it comes to the immense needs of bankrupt Detroit, foundations face extraordinarily difficult choices. Which investment opportunities make sense? What tradeoffs might be involved? What are the opportunity costs of various grantmaking possibilities?

Take the Knight Foundation’s recent donation of $250,000 for the development of the Eastern Market. Established in 1891, the market is a collection of fruit, vegetable, meat, and flower producers and vendors. Located about a mile northeast of downtown Detroit, Eastern Market draws thousands of visitors and customers. Last week, Knight awarded $250,000 to the nonprofit corporation that manages the market. The money will go toward updating a strategy for redeveloping the market and surrounding areas that dates back to 2008.

All grants are choices. In this case, Knight is making a commitment to an area seen as a linchpin in Detroit’s redevelopment, though in this case, it is yet another plan in a city that has had more plans and fewer follow-throughs than nearly anyplace ever. Although not far from downtown, Eastern Market is not a downtown development investment or an investment in the Midtown area of the Woodward Street corridor where the Detroit Institute of Arts is. Neither is it a direct response to Detroit’s multitudes of people in immediate need, like the children in Detroit’s bankrupt public school system whose challenges were highlighted in an article by Detroit Free Press columnist Rochelle Riley.

Part of the challenge for Detroit is placemaking: making its neighborhoods places people want to be. Can Detroit’s Eastern Market be revived as a hub for vibrant community activity, something comparable to Washington, D.C.’s Eastern Market near Capitol Hill or Lexington Market and Broadway Market in Baltimore? Detroit faces an ongoing debate between strategies for the elite versus strategies for a broader swath of residents. Particularly in communities like Detroit that are often characterized as “food deserts,” public markets are more democratic than elite.

Detroit’s Eastern Market is only one of several public markets that add to the sense of life and livability in Detroit neighborhoods. The key is to make a public market an anchor for a broader strategy for community revival. That appears to be the purpose of the Knight Foundation grant. Mayor Duggan is supportive of the Eastern Market strategy due to its potential for job creation and economic development. According to the Knight Foundation’s Katy Locker, the update of the Eastern Market revitalization plan is meant to take advantage of new opportunities and build on and strengthen new adjacent communities. The planning process promises to capitalize on neighborhood residents, who will be invited to participate in a task force.

Still, Detroit has been awash in plans for decades, many with a variety of mechanisms for public input, few achieving anything like their promise. The challenge for the Eastern Market plan is to ensure that the market contributes to the revitalization of the entire community, without relegating the needs of most residents to the curb. That’s the challenge for foundation grantmaking in Detroit as well, making sure that foundation grants do not simply accrue for the benefit of external elites or downtown property developers and owners, but for the residents of Detroit, who deserve the attention and support of institutional philanthropy.—Rick Cohen